Number Seven: Portland and The Garden

As Mike still had not emailed to reschedule, when a man named "Martin" (he wanted me to use a pseudonym due to a mildly illegal activity described in this blog), emailed me and said he wanted to show me the Japanese Gardens, I felt like I wouldn't be stepping on anybody's toes.  (Mike, if you are reading this, I have given you up for dead.  I am sorry if you are indeed dead, but, dude, you never got back to me.)  We decided to meet at the Rose Garden Gift shop in the late afternoon on a beautiful sunny and warm day.  The day was so clear, I was able to see several mountains from where I stood in Washington Park.  Nothing short of miraculous for Portland in April.

Via email, Martin had told me that I would be able to recognize him by his brown jacket, baseball hat, shortness, and a band-aid on his nose.  I arrived early and had time to sit and look at the mountain and the city below.  All of the Cherry Blossoms were beginning to release the lovely and delicate pale pink and white flower petals from their sleek, thin branches, and when the wind blew it made for a delightfully enchanting effect.
Martin arrived looking exactly as he had described himself, just two or three inches taller than me, his nose, appropriately bandaged.  After we introduced ourselves, we walked toward the Japanese Gardens,  and I slung my backpack on my back.  He asked me if it was heavy, which took me by surprise just a bit, not being used to courteous men, and I quickly replied that it wasn't; only full of my bike helmet and clothing.  As we neared the gate, he told me that he "was not that eloquent" when speaking of himself.  If I have heard this once, I have heard this six times.  So, I asked him to speak about why he loved the Garden.
He told me that there were more stories than he could tell, but that the Garden held special meaning for him for several reasons, three of which he would relay.  Martin was revealing himself to be quite the mystery.  The first was destiny.  Many years ago, he was working in California, doing work that I cannot describe, as I have forgotten what it was, but, suffice it to say that he worked all day long on a computer and would frequently change the picture on his desktop.  Then one day, he came across a picture of a scene so lovely, it stayed there, for years.  He did not know what or where it was, but he loved it.  Then, one day, someone came into his office and said, "Oh, you've been to the Japanese Gardens, huh?"  Which was what pushed him to decide to take the transfer to Eugene the company he was working for had offered to him.  He was later transfered to Portland, and he became a member of the Japanese Gardens. 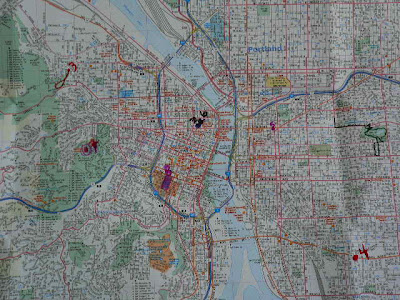 The second thing had to do with the aforementioned illegal activity.  This goes back several years to the ice storm here, when Martin had been going through a very rough time.  His father had just died, his sister had just died, he was in the middle of an awful divorce, and he was facing open heart surgery.  Martin decided that though it was hazardous on the road, and there was probably no one at the Japanese Gardens, that it would be worth some effort to try and get there in order to see the beauty the snow and ice would create.  He told me he felt at the time like the beauty might help lift him.  He drove to Washington Park only to find the main gate locked, but a side gate open.  He walked through and up and saw that the front gate to the Gardens was locked.  He decided that he had come too far to not try every option, so he walked around to the back.  On that day, walking around to the back involved walking through snow and ice over a very steep hillside.  When he got to the back gate, he saw that it was wrapped in chains, and his heart sank.  Dejectedly, he walked over to the gate and pushed on it, when to his surprise....it swung open.  He stood at the open gate, breathless.  He could not believe that in the middle of one of the worst and most challenging times of his life, he had been given such a gift.  He walked through the Gardens alone, its silent white light reflecting back to him.  He said that the rest of that day was much like that, wonderful things falling into his lap left and right, leading up to the culminating event at a Pub, where he walked in, sat down at the bar, ordered his favorite beer and burger, and began writing.  Several minutes after he arrived, a beautiful woman who had been in the bathroom sat down next to him and asked him what he was writing.  One thing led to another, and well, he ended up dubbing January 8th national Martin's Law Day.  Which, he explained to me, was the opposite of Murphy's Law, and only applied to him.  He celebrates this holiday every year.

The third reason he shared with me happened around the same time; he was dealing with an awful divorce, and had decided that he would not ever fall in love again.  So, he set about finding women only to talk to, maybe even hang out with once in a while.  One such woman convinced him (his word was "tricked") into meeting her for coffee.  He figured that he would meet her, stay for a half hour, and leave.  But, that is not how it went.  They met, and talked and talked at the coffee shop, then he took her to the Japanese Gardens, where they sat on a bench and talked for hours; until the Gardens closed.  Martin told me that it was on this bench that he fell in love again.  It was the same bench that he and I sat on as he told me these stories.

So there we sat in the Gardens, and he told me story after story of feats no mere mortal would ever dream of, much less get off his ass and put into action.  He decided recently to change careers and get training as a designer.  He would frequently pick up and just go places he had never been; small towns in Colorado, South Carolina, maybe even Connecticut; he just looked in the paper for cheap fares, would pack a small bag, and go.  He made it a regular practice to walk up to the most beautiful woman in the room and initiate conversation with her.  I was in awe of this small, humble man.

As we sat in the middle of the perfectly planned and intentional Japanese Gardens, something quite unintentional happened; I became overwhelmingly attracted to him.  It was the strangest thing.  I had felt nothing but inquisitiveness just moments before, and then, out of nowhere, that all too familiar, slow warming and nervous feeling in my stomach when I am near someone I am attracted to.  I kept looking at him, wondering how this could have happened.  I was on a path.  I had my future all mapped out, and it in no way included this man fouling it up with his heroic yet unassuming charms.

It started to get cold, and the afternoon was waning, so we decided to go our separate ways, and as we said good-bye, I put my bike between us to keep myself from spontaneously hugging him.  It was bad, the magnetic pull I was feeling toward him.  I turned to get on my bike, but realized that the sound of the birds was so lovely that I would walk home that day, giving myself the opportunity to enjoy the experience of spontaneous and unexpected attraction, to let it linger in my sinew as I walked down the hill from the Rose Garden and back to my little apartment in Northwest Portland.
Posted by Spike at 10:57 AM