Portland and the HIPPO

Todd, an older gentleman whom I decided was probably not from Minnesota, sent me an email suggesting several places to visit: Kelly Point Park, Union Station, The Montage, and Hippo Hardware.  I sent him an email in return, narrowing the options to two; Union Station and Hippo Hardware, and he chose Hippo, which was great news, as that was my first choice.  I told him in the email that I don't do the phone thing, but neglected to tell him that it was for safety's sake, as I do not want to inadvertently give a person I don't know my phone number.  He assumed that I just didn't have a phone, and informed me that telephones had been around for about one hundred years.
I think most people might have been slightly offended by this sarcastic observation.  As for me, it was difficult to know whether I should be offended or impressed, but quickly settled on the latter after considering the extensive use I make of my own sarcastic wit, and came to the conclusion that I might actually learn a thing or two from ol' Todd. 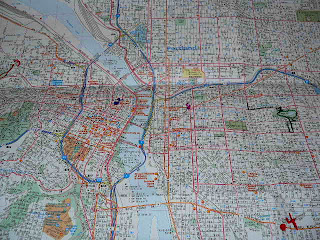 Hippo Hardware opened in 1976 and has been a Portland institution ever since.  Other stores have arrived on the Portland scene since this time, which have inevitably grown into places where you will find more reproductions of old stuff than actual old stuff, but Hippo has remained true blue, carrying a ginormous array of older light fixtures, plumbing supplies, tubs, toilets, doors, door knockers, handles, knobs, hippopotami, and just about anything else you might or might not need for your house or apartment.  The other truly magnificent thing about Hippo Hardware is that it is a hardware store.  I really miss local hardware stores.  They used to be my favorite places to go when I was little, back before we had internets and the Google.  There was one in particular right down the street from my Dad's antique shop that had a big brass hammer on the door for a handle and stacks of bins of shiny metal objects to peruse.  On very special occasions Dad would take us there; he would lead my brother and I through the store to the back, and as we walked, my eyes would visually fondle all of the amazing tools, fixtures, picnic furniture and items which I could not name, but rather, dream wonderful and amazing usefulnesses into.  He would stop and talk with some of the men who worked in different areas of the store, and when he arrived with his purchase at the front counter, he would tell the lady to put it on his account.  He would then take the hardware back to his store, and, as we watched, he would fix something.  Sometimes he would even let us help.  I think this enchanted place is the reason I never really could get on board with Home Depot.  The stale air alone guarantees you can't wander the aisles for more than a half hour without feeling sick, and good luck getting someone to even talk to you, let alone remember your name.

Hippo Hardware, in addition to being a place where people actually talk to you, is a monument to tragic beauty: it is, for the most part, a pretty typical looking building, except for the ginormous paintings of Hippos masquerading as columns on each of the four sides of its six columns out front, and the dancing (and singing?) Hippo painted on the garage door on the side of the building.  For most Portlanders, however, it is a sight which has all but blended into the landscape; we have not only grown accustomed to the flowering trees, beautiful mountains, and amazing hills and valleys of the Pacific Northwest, we are also very used to the intoxicating sight that is Hippo Hardware

Todd and I decided to meet out in front of the Hippo at noon, where we were greeted by a sign on the door that read, "All children under twelve must be accompanied by money".  I love signs that end in unexpected ways while simultaneously making fun of young children.  Todd is a very tall man, or rather, appeared to me to be tall, as I am quite short.  It is a simple matter of geometry and perspective, and unfortunately, on this front, tall people seem a bit mysterious to me as I can never truly assess how tall they are.  This is a good explanation, now that I think about it, as to why I am uncontrollably attracted to tall men.

Todd is an architect, and he started explaining his love of The Hippo by telling me that though he does not believe in reincarnation, he feels strongly that at some point he had lived in the 1930's, due to feeling, on a daily basis, like a pull toward that time period.   Additionally, he told me, a couple times a month, he feels an even stronger pull for some reason unknown to him.  This would explain his telephone comment in his email, judging by the description of these mysterious feelings, he was most probably around to use them at the time of their creation. 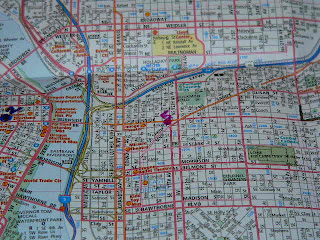 Walking into Hippo is a bit overwhelming.  As you walk through the front door, you are faced with a dizzying array of handles, knobs, and drawers full of what I am sure are secret and lovely treasures.  Once you walk through the front room, there are three or four ways to turn in order to search out old and wonderfully detailed items with which to adorn your home or craft object.  As Todd and I stood in the front room, he bent gently toward me in order to look me in the eye as he spoke.  While I never knew any of my grandfathers, I am quite sure at least one of them would have spoken to me in the same way if he had ever taken me to a hardware store; as if he were about to reveal to me a world of lost treasures from days gone by.  As we walked through the labyrinthine space, Todd and I occasionally stopped in front of odd looking objects, and wondered at their purpose, or, try and figure it out by identifying small moving parts that we could recognize.  This is one of my favorite games.  I call it, "what the hell is that thing?"   The good thing about this game is that, unlike basketball, you don't have to be really tall to play it.

We went up stairs, we went down stairs, we saw strangely shaped (and colored) toilets, amazingly ornate doors, an Elvis bathtub, beautifully detailed vintage light fixtures, all different types of hot and cold faucet handles, a full wall of door knob plates, head boards, numbers and letters, both large and small, a mantel piece, a giant assortment of keys of all kinds, and, of course, a very interesting collection of hippopotami.  All in all, it was enough stuff in enough spaces to feel like you would need more than a day to really see everything, just like in the Louvre.

As we walked through some of Hippo's darkened rooms chock-full of stuff, Todd lamented that while the Rebuilding Center is an incredibly great place, it was, unfortunately, out-Hippoing Hippo in certain respects.  As I looked around, I could see what he meant; the panel doors, fixtures, and bins of handles all reminded me of things I had seen in the Rebuilding Center at one time or another.  Somehow, though, through it all, I believe that Hippo will survive, if only for the reason that it is, in its purest form, a perfect symbol for the City of Portland itself: it contains oddities, novelties, and incredibly functional items, and some things that you just have to stop and wonder, "what the hell is that thing?".
Posted by Spike at 9:06 PM