Portland and the Good Samaritan

There is a wonderful little yoga studio about a block away from my apartment in Northwest Portland, the location of which I took as a sign to start going to yoga classes.   After going for about a month, I decided to sign up for a year's worth.  Sheila, the woman who took me to the favorite place that is the topic of this post, is the owner of this studio, and a person who has in no small way inspired me to be a better and more present person.  To say that this practice has changed me would be an understatement.  In addition to the obvious physical benefits I have gained, the emotional and psychological benefits are overt and have been recognized by people like my therapist, my bff, and many of my colleagues at work.  When Sheila said she had a favorite place to take me to, I was not only completely flattered, I was also thrown into a state of imagining what this magical place might be.  I had all of these preconceived notions going through my head, pointing me in what I thought were reasonable directions: A shrine?  A park?  A tree?  A place to drink tea? A new age bookshop?  A dog park?  A playground?  My mind raced with the possibilities of what this amazing and inspiring place could be. 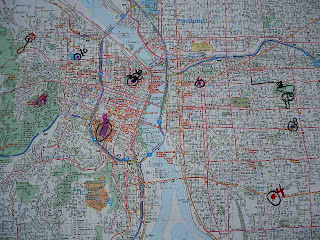 She told me to meet her at a Starbucks on NW 23rd; that we could walk to her favorite place from there.  As I sat in the Starbucks waiting for her, I judgmentally looked around at a business I have come to consider as innately evil, feeling pity for the poor people working behind the counter, glaring at the merchandise neatly lined up on the shelves, and critiquing the loud posters advertising this season's newest liquid crap to slurp down while on your way to whatever incredibly ridiculous mall-type-place you must go to in order to buy the latest fashions that will be considered passe in three months' time.  If you are thinking I am a hater of incredible proportions, and a hypocrite to boot, you are most probably right.  However, this will not keep me from hating Starbucks and all of the horrible things it has done to our culture and our planet with the fire of a thousand suns.  Some of my closest friends have attempted to argue on Starbucks' behalf, but I cannot be swayed.  As I very recently told one of my best friends, "agree to disagree".  It has become my Starbucks Mantra.


Sheila came right from teaching a class at the yoga studio, looked around the incredibly contrived corporate cafe and said, "This could be one of my favorite places too!" or something to that effect, and of course, I was stunned.  I should not be, I know.  Even in Portland, the most "shop local" city in the U.S., Starbucks still does an incredibly brisk business.  This fact, the fact that Sheila loves Starbucks was something I had to accept.  My inspirational yoga teacher, the one who glows and smiles and looks you in the eye and tells you to breathe.  My beautiful inspirational yoga teacher loves Starbucks.  I remembered her advice, and I breathed.  Deeply.  Then, we started walking. 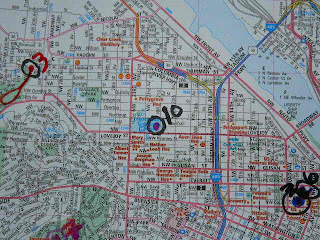 We walked down the flowering tree-lined streets of Northwest Portland, and as we walked, she pointed out the building she lived in for five years, in a tiny studio, while she saved her money to start her yoga studio.  As we neared a small park, I looked in and thought that it must be it, but, we walked right on past as she noted how much she liked it.  She told me about starting her counseling practice while simultaneously teaching yoga, and noticing that she was unconsciously blending the two in order to help her clients.  This seemed to her to be the best way to help them, so she decided to start offering yoga therapy in order to more effectively treat her patients.  As she spoke, I wondered if this were something I might try at some point, and then, we rounded the corner and faced Good Samaritan Hospital.  She led me up the sloping sidewalk to the front door, and my head started to spin just a bit.  It was strange, as I had just spent two hours talking to a man at Emanuel Hospital, just across the river, about his favorite place.  Two hospitals in one day?  As two favorite places?  As a person who has spent way too much time in hospitals due to her mother's losing battle with cancer, I could not think of a place I would want to be in less than a hospital, but, in we went.


We walked through the lobby, to the elevators.  When an elevator arrived, we got in, and she pressed the number "3".  I really had no idea where we were going.  Sheila shared with me that she had started coming to this place during very dark times in her life, and I started to wonder if it was the children's ward, or perhaps the room where they keep all the babies.....then, the elevator stopped and we got off and walked towards....the chapel.  Yeah.  First Starbucks and now this.  As we walked in, we were greeted by a huge room with pews and at the far end, a giant crucifix.  As a non-practicing Jew, the sight of this room and the situation I found myself in struck me as hysterically funny, but, I stifled the laughter, and tried again, to breathe.  She led me to the rear, to a small, quiet room, with a small altar, and sat down. The room was simple, quiet, warm, and quite comforting.  She knelt down in front of the altar.  She invited me to join her, and for reasons that I still can't articulate, I did.  I knelt down next to her and well, I think I prayed, though it felt more like meditation.  I mean, it could have been prayer, but I had never really officially prayed before, as I had never really been called on to do it, so I just closed my eyes and I breathed.  We sat there, side by side for several minutes, and all I could do was breathe.  With eyes closed, the sound of my own breath in my ears, I realized that my assumptions had kept me from appreciating this person, had kept me from seeing her.  It was, no pun intended, quite a revelation.


I have been sitting on this post for a bit.  I have known Sheila for several months, and I had formed some assumptions about her that proved to be less than accurate, and this was a bit troubling.  I was so surprised by the chapel and Sheila, not to mention my own short-sightedness, that I felt a need to ruminate.  I had been thinking about my own perspective and how I see the world, and the assumptions I make about people, and how that shapes my experience.  Then, I received an email this morning from a man answering my ad in Craigslist:

Yet another woman using the male willingness to spend time and energy on
line, and in person..to suit their personal benefit..

Id like to ask you to consider a  more giving act, rather than a selfish
and taking act of just using people.  At least youre honest, and I couldn't
be less interested.
I replied:
Thank you very much for your honest answer.  I am so sorry for your pain.
I reasoned that he had probably been hurt by at least one woman who had used him, I figured that was the only reason he would send such a hateful email to a complete fucking stranger.
His response:

patronize someone else, you're the mercy case asking for free tours at
the expense of others.

no pain..just hate users..with their hand out because they can..

were surrounded by them,

I could be a user as well and exploit, I just choose not to..Thanks for
your email so I can conveniently block it..

Surprisingly, his return email did not upset me.  Not long ago, I might have made it my mission to let this man know exactly who he was dealing with, but, all I could feel for this guy was sadness. Though calm, I did, unfortunately, take the opportunity to search his email address to find out exactly who he is, and inevitably found that some of his interests align with mine, and that he had even posted on one of my favorite blogs; a blog I follow due to its inspirational nature.  I found his Facebook page; ironically most of his "friends" are female.  I even know what he looks like.  I was tempted to enter his email address in the space on my blog page where he could "follow" my blog, (that would fix him!), but I did not.  I considered sending him an email from an alternate email address, but thought better of it.  I think a stronger person might have just let the whole thing drop, maybe just short of viewing his Facebook page, but, I could not help but pick just a little at it like a itchy hardened scab on a wound that will never heal.  I wrestled with my need to have the last word for several hours, until I finally realized how awful it was making me feel.


Just a couple nights ago, someone asked the question, I think it actually might have been Sheila, as to what suffering is.  I responded that I believed it to be caused by clinging to your expectations in situations in which they are not met.  I am pretty sure I read that somewhere, but it felt right at the time.  Thinking back, it was my expectations which had made me angry in Starbucks, and frightened in a Chapel of all places.  Ironically, the thing that bothered me about the angry guy who answered my ad was that he had made assumptions about me based on his experiences.  I had done the same thing to Sheila; so, how exactly, are we different?  The answer, of course, is that we aren't, and while I would have loved to have come to a different conclusion, one that blinds me to my arrogance, and paints me as a good Samaritan, the one I came to is the one I always come to; the one that embarrasses and humbles me, and reminds me that to be human is to be frail, fragile, and sometimes, very very wrong about the people who inspire and teach me.  Even when it is my yoga instructor I have so carefully placed upon a pedestal.  Even when it is an angry guy answering my Craigslist ad.