Portland and The Beautiful Dance

I bought a package deal to run an ad in the billboard section of the Willamette Weekly for four weeks.  On the last day of the last week, after I had lost all hope for any response, I received an email from Juana, telling me that she liked my project and that I should go to the dance studio that she moved to Portland from New Mexico in order to attend.  This seemed incredible to me, but, as I told her, I needed her to be a part of the equation for this to work.  After much attempt and a bit of failure, I finally made it to the space appropriately named Euphoria Studios. 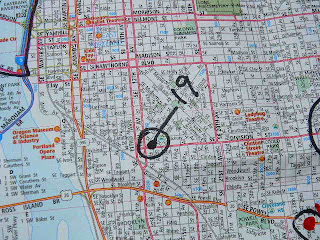 I arrived a bit early and ate at Artemis cafe, which specializes in organic local foods.  I ate something they were calling a "pot pie", which amounted to red beans and rice piled up in a small souffle dish.  Not at all pie-like, but delicious nonetheless, and I washed it all down with some tasty Townshend Kombucha.  I think I might have a slight addiction when it comes to Kombucha, but I will save this topic for another day.

The building is located on SE 12th and Division, and used to house a carpet warehouse.  Euphoria studios, the place Juana wanted me to visit, is in the back of the building, and consists of a beautiful and welcoming sitting area with more pillows than you might find at Costco World Market.  There is a store to buy garments which do one of two things as the wearer walks: billow or jingle.  There are also two dance studios, complete with springy wood dance floors, each appropriately decorated to reflect the flavor of the belly dance genre.

After looking around the shop, I went into the sitting area and sank into a large volume of pillows on one of the couches and waited for someone who might look like a "Juana" to appear.  There were roughly 10 or 12 women sitting around in belly-dance costumes, and while I felt like one of them could have been her, I did not want to assume and approach a "Juana-looking" person only to be accused of racial profiling in a belly dancing studio. 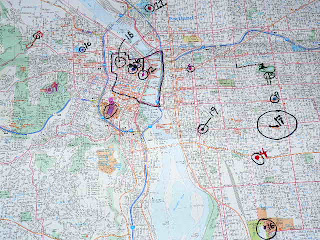 The classes that had been taking place let out, and women filed out of both studios. All were dressed in billowy jingling outfits, and all had the glow of a recent physical undertaking.  After they had left, all the women who had been on the couches started filing in.  I took a chance and approached the woman I thought might be Juana, asked her, and, after raising her eyebrow a bit, admitted to being the "Juana" I was looking for.  Sorry, had to.  After that, she was incredibly welcoming and even demonstrably excited at my presence. She even hugged me.

After we chatted a bit, Juana brought me over to her instructor and studio owner Jane Archer, and introduced me.  Jane seemed just as excited as Juana that I was there, and asked if I wanted to watch or maybe even participate.  I opted for the former, but wondered after I answered if the women in class wouldn't feel self-conscious with someone sitting in the studio watching.  It seemed like a somewhat vulnerable position to be in; clothed in midriff-baring outfits, shaking every part of their bodies in unison....frankly, just the prospect of watching them felt a little uncomfortable.

The music started and every woman, all of six, started moving her hips in a beautiful and quick unified pace, leaving me to wonder why this particular form of movement is called belly dancing.  Jane would call out different directions, and all the women would follow.  Everything about the dance was beautiful; the way they stepped, the way they moved their arms, the way they held their heads.  The contrast between the strong framework their arms, neck and legs provided to the fluid movement of their hips made for a mesmerizing effect. The women were all different shapes and sizes, most of them certainly not what society would dictate as "ideal", but this was clearly not an issue.  These were all confident women.  It struck me as ridiculous that I had been worried about making these women feel uneasy.  Watching them dance, it was hard to imagine anyone making any of them feel as such.

As the class went on, they practiced moving their arms, turning their heads, and taking steps in particularly beautiful ways.  It seemed that their movements were meant to approximate water as closely as possible.  Then came the big finish.  All the women put on finger cymbals, paired up into three sets of two, and did a dance where they faced the audience, (me).  They rotated counter clock-wise, the woman on the left in the duo leading the movement of each pair.  Watching them dance actually made me feel hopeful.

After the class was finished, I asked Juana if she wouldn't mind talking to me a bit about the school and the class.  We walked over to the common area and Juana told me her story.

"I grew up in a very small conservative town in New Mexico.  I was going to the local community college there and saw that they were offering a belly dance class.  I was so surprised, I couldn't believe culture had come to this little town.  I took the class and fell in love.  You see, I had grown up being told that I couldn't do anything and that I was never good enough, so that when I took this class, and I felt good in it, and I was good at it, I started to think all those negative messages were wrong.  I eventually got to the point where I was teaching classes, and then I went to a workshop with Jane in California, and I knew I had to take classes with her.  I packed everything I could fit into my little car, which isn't much, along with my two dogs, and I moved to Portland.  When I first arrived, I walked into the studio, and I burst into tears.  I was so happy, I couldn't believe I was here."


Juana is all of 25, a small woman, and recently out of work.  She is looking for a job that will allow her to live and go to class, but it has been a bit of a struggle for her.  Back when I was 25, it was easy to be lackadaisical about my dreams.  I was more of a time-bider than a dream pursuer.  I could do that as jobs were pretty plentiful.  It is a different story now, and Juana is not giving up.  After watching her dance, I can see why.  If I had to choose one word which described what I had just watched, it would probably be "freedom".  Who wouldn't scrap their way towards an existence to feel that?

I asked Juana if Jane would talk to me, and Juana went to get her.  Jane is one of those statuesque beautiful women whose confidence only makes her more appealing.  She sat down on the couch next to me, and we talked about her background and how she came to run the studio.  Then she told me about the transformation that happens to women when they first come to the dance classes.

"When women first come in, they stand like this." (she hunches her shoulders and covers her chest with her arms) "They ask if they have to show their bellies.  After their first class, they are like, wow, that was pretty cool." (She stands with her arms by her side, shoulders back, giving a sideways look of small triumph), "The next class they come in like this," (She stands straight, her arms raised over her head, a look of confidence on her face) "Then, they come in and they are showing their bellies, ready to take on the world."  As she finishes describing this, Juana tears up and as she wipes the tears from her eyes, they hug.

As Jane hurries off to take care of her kid, she urges me to come back to take a class.  I remain and talk to Juana for a while, and we talk about how great Jane is, and what possible things Juana might be able to do for work.  I tell Juana to look for the post in the next week or so and I leave.

Sometimes when you leave a building, you feel as if you are decompressing from the stale air and energy that inhabits a place.  It is as if, without knowing it, the environment has been pushing down on you, making you smaller.  There are also times, such as now, as I step out of the studio and into the Portland Dusk, that I feel like anything is possible.  Like I have witnessed the recipe for infinite possibility, and it turns out to be quite simple.  The problem is that the key ingredient, courage, is quite rare, but can be found in certain small towns in New Mexico.
Posted by Spike at 5:07 PM