Portland and the Exotic

I met Ron through my bff.  He has lived in Portland for most of his life, and has seen it grow from a small town into a small city.  Ron is a very handsome middle aged man who seems incredibly comfortable in his own skin.  He has many favorite places in Portland, but The Chinese Garden was what he settled on for our meeting. 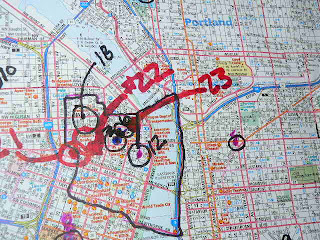 Also referred to as the Lan Su Chinese Garden, it first opened in September of 2000, and occupies exactly one square block, or 40,000 square feet of the city in the heart of Portland's China town.  There is a lake located in the center of it which is approximately 8000 square feet.  The garden holds more than 90 specimen trees and many unusual shrubs and perennials.  Ron says he likes to come to the garden in each month of the year to see the changes, including, he says, the significant change in scent which occurs as some flowers blossom and grow and others whither and die.

As we walk through, Ron shows me some of the detail and the planning that went into the garden. It is a cool and overcast July, and we are feeling lucky not to be suffering the heat the rest of the country is feeling.  As we make our way to the Teahouse, we walk by groups of people and individuals all taking in the beauty of the garden.  In the scholar's study, or, as it is properly named, The Celestial House of Permeating Fragrance, there are two children playing servant.  They both sit in ornate wooden chairs, their legs just peeking out over the seats and their short arms reaching high for the arm rests.  The little boy shouts, "I want water!  Bring me water!"  Immediately after, the little girl shouts, "get me fruit punch, unsweetened!"

We move on and into the Teahouse, which is packed.  We are directed upstairs and find a nice table by the windows.  The ornate shutters are thrown open and the exquisite view of the lake below is lovely.  Ron smiles at me, turns his head to look out over the lake and tells me why he loves the Garden. 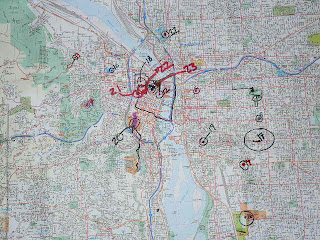 "I really like the sense of calm The Garden brings, that sense of zen, the sense of peacefulness.  I walk through the gates, from the hustle and bustle of the city, and I'm transported.  It really centers me.  As soon as I walk in, I feel like I can take a deep breath, and the stress and anxiety melt away.  Over the years I have brought many people here, but I think it is under-appreciated.  People write it off.  They feel like they have been to the Japanese Garden, so they don't feel the need to come to the Chinese Garden.  They don't realize that they are two separate animals.  It is a huge jewel in Portland's crown.  That's why I have a membership plus, which is incredibly reasonable.  I can bring someone with me every time I visit, I have unlimited entry and I can take the walking tours for free.  In the summer they have concerts which members have access to first and bi-annual plant sales that members get into the day before to have first pick, which is great because some of the plants they sell are very rare.  You should see my garden in my yard, it looks a bit like this."


We talk a bit about China Town and Old Town, and how it has not really caught up to the rest of the city in terms of development.

"I have seen the evolution of the city, and Old Town/China Town has always struggled.  Ever since after the war, from what I understand, when the flight to suburbia took place.  Old Town was also kind of the dumping ground for the derelicts and the people being let out of the asylums and State Hospitals that were all shut down in the eighties under Reagan.  That's when the streets were flooded.  A lot of the soup kitchens and stuff were all based in Old Town.  The Chinese actually ended up moving out to 82nd.  That is where the real China Town is, that is where you can find really good Chinese food.  There are a few hold-outs here, in China Town, but most everything is out along 82nd now.  The city is torn.  It wants to grow and develop, but it also has to provide services to the indigent population and the people who need mental health care and food on the streets.  They gotta go somewhere.  Even in the Pearl, you have mixed use and mixed income buildings.   Then you have to deal with the fact that this is very close to the entertainment district.  All of the bars down along first and second on the weekends get crazy-stupid with people coming in from the suburbs and lookin' to be in the big city, you know, the twenty-somethings that are rowdy and not really quite mature."

The conversation shifts to how the Chinese Garden fits in the context of Old Town, and how The Garden was built.


"I was living here when it was being built.  I remember it very clearly.  Before, this city block was just flat dirt, and I was thinking, you are going to put a whole garden in that small space?  How are you going to do that, exactly?  They pulled it off.  The details, the way it's laid out, there are so many endless details to focus on.  Everything here, every detail has a meaning.  A lot of this was built in China and shipped over, and they brought over Chinese craftsmen to build the rest.  It is really quite phenomenal, the way the stones are arranged, the way certain stones face toward the sun.  That is why I try and use a different docent every time I come here.  Sometimes I just come in and read a book on a bench, but it is nice to go on the tours.  A lot of the time I try and work it so that I can come in with a tour.   I wish Portlanders appreciated it more.  Just that sense of peace.  It takes you away from the craziness of the outside world.  I have come in to the garden on warm days, and it actually feels cooler within the walls."


We sit in the quiet of the Teahouse, drink our tea and eat our turnip cakes (amazing!) and coconut pastries. We talk about the course Ron's life has taken, how he has traveled the world and about his plans to go to Africa in the near future.  Through our conversation, we discover that we are interested in meeting people and creating relationships all over the world.  As we talk, we realize that we are living in a world which feels small and a life which gets proportionately larger in direct relation.