I was impressed with her before I met her. When I started setting something up to meet with Kelly, I went to a link to her blog, and then to her portfolio and was a bit intimidated by her, well, her life.  She is living a life I have always coveted; an urban life in a great city in a creative industry.  Not only that, she wanted to meet me at a Gallery opening at 941 Geary as her favorite San Francisco place. The opening; The City We Love, a modest sampling of local Graffiti and street art culture. My biggest concern for this meeting would be to not behave like too much of a dork. 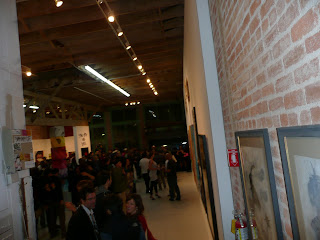 I arrive at the crowded gallery just before nine. As I lock my bike up to a pole out front, I am thankful it is only a rental and not worth much. The gallery is in the Tenderloin district; if my bike were of any value, all I would be returning to at the end of the night would be random pieces of bike locked to a pole. I duck into the gallery and look around.  It is not long before I find Kelly talking to a very tall and incredibly stunning woman. After we introduce ourselves, Kelly reaches into a brown bag she is holding and says, "I brought you a beer." Now, I am even more impressed.


I look around. It seems like almost every other person is also holding a brown bag and consuming some sort of alcohol. There are large canvases on the walls, and in some places, bricks and bananas on the floor. The people in the room are from every social class; rich people, skate kids, photographers, gallery geeks, hipsters, hippies, and even a few who look like they might be street people. I start to relax a bit after I survey the crowd. Kelly and Kirsten the Beautiful (as it turns out, an Australian woman and the Gallery owner's wife) are talking, so I take the opportunity to survey the show.

It is incredibly crowded and I keep bumping people with my backpack and helmet. I step on one woman's toes twice. As I walk around, I can't decide what is more interesting, the art, or the people in the room. I give up on trying not to behave like a dork. With my polka-dot helmet and pig tails, I might as well be holding a sign. After I look around, Kelly and I take an opportunity to find a corner and chat. Here, by the large garage door leading to the alley and the food carts within it, she tells me why 941 Geary, as well as White Walls and Shooting Gallery, are her favorite SF places.

"Shooting Gallery and White Walls bring some of the most amazing artists in the city together in one place. You see everyone from celebrities to high end people who can obviously afford the art in here, to the kids in the mission, to all the artist's friends. Everybody has an identity in this city. I also think that San Francisco doesn't get a lot of credit for the art scene, obviously much bigger cities do, but I think we have some really incredible people here.  It is one of the scenes in the city that is really vibrant with an incredible amount of talent." 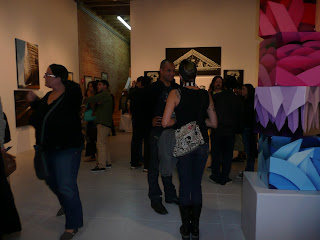 I ask her what's up with the alcohol in brown bags. I assume it's concept-driven to enhance the show, but it turns out I am being a bit too "high-art-minded".
"You gotta love the brown bags everywhere.  I have always loved that.  It is a way around city code.  You have to have a license to provide alcohol.  If you bring it, it's cool, it's legit. I go to a fair number of openings, but it's always a good time. It's about the people who come, how casual the space is, like going over to a friend's house."


After Kelly introduces me to gallery owner Justin Giarla, I tell him about my project. After I explain the sponsorship strategy for it, he grabs a bunch of money out of his pocket and hands it to me.  I guess he is a sponsor now. Later, Kelly tells me how she and her husband Peter became friends with Justin and Kirsten.
"We have been going to Shooting Gallery, White Walls and 941 Geary for a long time.  We ran into the gallery owners in between their neighborhood and our neighborhood, in the dog patch, at Serpentine which is one of my favorite restaurants.  We recognized them and did a double take, and decided to fuck it and just say hi and we had dinner together. They are so chill and cool.  They are super nice and super welcoming."

I am standing in this spectacular gallery, talking to this amazing person with an ideal life. Then, she says something that shocks me. 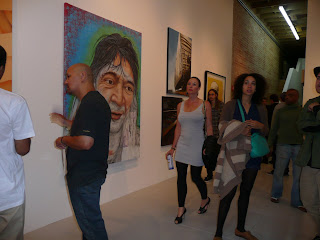 "There is a huge possibility I would leave San Francisco.  It can be a little small sometimes. I think the city is really beautiful and lovely.
Architecture and design-wise, it is a little bit difficult in a small city.  It can be a little conservative.  I can see myself being back in Los Angeles, but, there are several places I could be.  Though, I am married, too, so Los Angeles is probably the only viable city for the both of us."


I cannot believe my ears. How could you ever leave this Utopia? This Island of Cool in a sea of normalcy?
"San Francisco is an incredibly difficult city to work with.  Not that that should stop you, you can just be a little bit more creative with the interpretations of things.  You battle a lot of people.  You battle neighborhood groups who think that things should stay the way they are, you battle people who think that the city should be all Victorians, you battle groups who think you are taking away homes from other people.  All of these come together and sometimes can be the perfect storm to prevent progress, at least in architecture.  It hasn't actually stopped, because obviously we have had some amazing breakthroughs in the past few years, we do have some people who are doing some amazing work.  But, there is not as much support here as there is in a city like, say, Los Angeles, where it is a bit more open-minded.  Los Angeles has more of a pushing the envelope type of mentality."


As she tells me how she might do better in L.A., my heart sinks into my colon. I can actually see her point. It hadn't occurred to me that new design and ideas might be feared in what I see as one of the most progressive cities in the U.S. 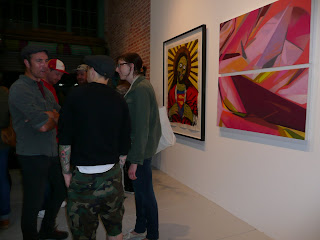 The lights in the gallery start to go off, and Peter, Kelly and I depart. Kelly asks me if I like Martinis, to which I reply, "who doesn't?" She tells me that they are taking me to Bix, a supper club in the Jackson Square/Barbary Coast area of the city.

After a lot of stop and go driving, we arrive. The stark contrast between where we have been and where we are going hits me as Kelly and I walk through the door at Bix. Everything from the woodwork to the artwork to the martini glasses chilling in a silver bowl of ice on the bar is old-school elegant. My first inclination is to take out my camera, but I stop when I see a guy to my right taking pictures of himself at the bar. If ever there was a place to be cool, this was it. Instead of taking pictures I decide it is better to stare with my mouth open at all the swanky people and beautiful details of this amazing supper club. Kelly and I are lucky to score some seats at the bar. Kelly orders us all gin martinis. Peter is driving around the city looking for a place to park. I am still looking at everything with my mouth wide open. The Jazz trio plays a mellow tune. After Peter arrives, we talk a bit about Peter and Kelly and their cool San Francisco life.


A little later, two of Kelly and Peter's friends join us there for cocktails, and we sit around talking for a while. As we talk, I have intermittent thoughts of surprise and gratitude. I can't believe how lucky I am to be able to drop in on their lives.  This has by far been my most exciting and wonderful night in San Francisco.

At the end of the night, Kelly and Peter drop me off at my bike in the Tenderloin and stay long enough to watch me unlock it and safely take off in the direction they have pointed me in. I ride home through the cold night air to my new couch in the Mission. Though many have warned me against it, I am not scared. Life and the light of the full moon on the streets of San Francisco are all I need to make me feel at home in this dimensional and beautiful city.
Posted by Spike at 7:24 PM