San Francisco and the View from the Roof

I was introduced to Matt through my friend Booger.  The first conversation we ever had was on the phone.  He offered to have me stay at his house if I needed to.  It just so happened that I needed to, and the offer provided me an opportunity to stay in Stinson Beach over the first weekend that I was in San Francisco.  Matt is a good cook.

Later that week, Matt met me at the corner of California and Taylor, in front of Grace Cathedral, to take me to his favorite San Francisco place.  Matt is a fully bearded, handlebar mustached man of 39, who, one year ago, hit the side mirror of a car on a darkened street off Upper Haight.  A near-death incident, Matt has been spending the last year recuperating and sorting out the remainder of his life.  Matt was very clear about where he would be taking me.

Several blocks from the Cathedral, Matt and I slide into a small elevator in an old building where he used to live. Matt hits "4", and the creaky elevator starts to ascend.  It stops, we step out and round the nearest corner.  Matt points out his old apartment down a short and starkly lit narrow hallway.

"That was my apartment right there, number 401.  I tore that thing apart and totally rebuilt it. I took out a wall and a bunch of other stuff."


We turn in the other direction and Matt leads me up a narrow flight of stairs to the roof.  The sky opens up above us and the sounds from the street rise to meet our ears.  We walk toward the ledge and Matt points to the fire escape.


"I would always get locked out, so I would just come up here, crawl down the fire escape, and if I just rattled the window, it would open." 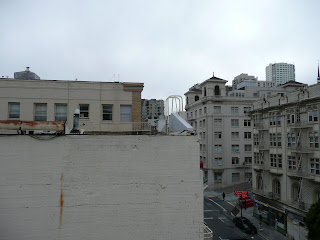 We sit down at the front end of the building on the roof, Matt pulls out his bag, and starts rolling a joint. Then, he tells me why the roof of this old building is his favorite place.

"San Francisco, when I first met it, scared the absolute shit out of me.  I am from Wisconsin.  I was 19 the first time I came here. I was in the army, and being from a little suburb north of Milwaukee, I had never really seen anything but German people.  So me and my buddy pull off into the Mission, and its all Mexicans and Salvadorians and Latin peoples, and it was just overwhelming."


"The traffic, getting here on the freeway, and the difference of all the people was overwhelming to me.  Which, frankly, is one of the things that I like about Portland. The lack of diversity.  It's totally not challenging there.  So I moved from San Francisco, circuitously to Portland.  There was a little China in there, a little Wisconsin, but I was overwhelmed by the energy of San Francisco at that point.  Back then, I really liked being in situations where you knew what to expect around every corner. In Portland, there's no real surprises." 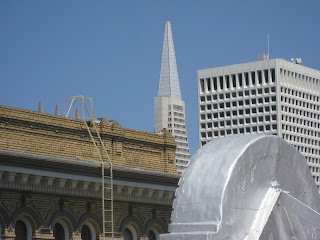 It takes all of my energy to not make fun of Matt for being from Wisconsin. As an Illinois-an, I have made this enjoyable and relaxing activity a part of my life, and for some reason I feel comfortable enough with Matt to be able tease him mercilessly. But Matt is very earnest.  He tells me about his relationship with the city with his entire being.  He is electrified, and I just can't find it in me to make fun of him in this state.


"When I moved here, specifically, I had spent lots of time in the woods, and I came from this background of not really loving the city, you know, being overwhelmed by it. I would come up here in the 90s to those underground raves to do a bunch of ecstasy and play around at those parties. I never thought San Francisco was where I wanted to live.  I wound up moving up to San Francisco because one of my friends from Wisconsin was living here at a crack house I moved into.  I thought I would just hang out with him, stop being a carpenter, and go to Academy of Art and do their furniture design program.  I figured I would still work with wood, but I wasn't going to be on job sites, living the nine to five, 40 plus hour a week thing." 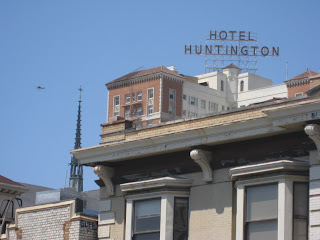 "Well, I wound up back in construction, doing the regular thing. I couldn't afford to go to Academy of Art. This place when I first moved in to it was 12 hun a month, and after they saw what I did to it, they raised it to 17 hundred a month.  I just went back into the same thing, but the time that I spent here was probably the most significant growth period of my life.  The years I lived here, right below us, is when I developed my career, you know, who I am professionally. I developed my relationship with cardiovascular exercise as a component of my commute.  This place was pivotal in all of those different things, so the seven years that I spent in this building, exploring the city and really understanding it and becoming one with it were really important to me. I would come up here (to the roof) all the time at night and just think, wow, look at this big, beautiful, amazing city."


Matt breathes in deeply.  His smile is quiet as he looks up at the early evening sky.  Then he looks at me. After he exhales, he tells me about The Bloodhead. 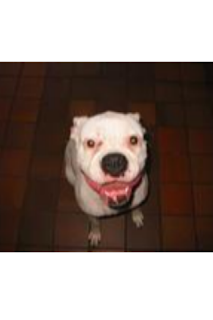 "This is where my dog, The Bloodhead, lived with me.  She died in this apartment.  Good fuckin' place.  The day that The Bloodhead died, I was building manager and I had gone downstairs to go deal with something in this little shop space that I had, and when I came up, she was dead.  Lying in the chair, dead, you know?  She was an old dog, and of course it was hard for me, and I didn't have a car, so I was trying to figure out how I was going to get her to the vet.  I couldn't get into a cab because I was too messed up.  So, I wrapped her in plastic and slid her into my wilderness backpack. My sixty-five pound Pit bull- I threw her on my back, walked out the door, tears pouring down my face, lookin' kinda homeless and wierded out, and walked two and a half miles to the vet. I stopped at a Starbucks on the way, because I felt like I needed something to bring a little bit of comfort into my life.  So with a dead Pit bull in my backpack, I walk into Starbucks to get a coffee, and everyone is lookin' at me kinda weird, but no one knows there is a dead dog in my bag. Then, I am crossing a one-way street beyond it, and a car flies around the corner and almost hits me, and I just start laughing. If that car would have hit me, the ambulance drivers would have found a dead dog in my backpack.  It was the most hilarious thing."


In the streets below, a car's horn honks loudly.  Matt listens, and says to the sky, "oh, man the sounds of this place too, I love the sounds of it."


We talk a little bit more about growing up in Wisconsin, the innocent upbringing that provided, and his babysitter, who he had a crush on. He tells me she was "trouble", and that he is attracted to women like her.


"Ive always dated girls who were trouble.  I'm a little bit of trouble myself, I guess.  So I figure I probably shouldn't impose my insanity on somebody sane."


When I ask Matt why he turned out to be trouble, being raised in Wisconsin and all, his response, after mentioning several bad influences in his youth, comes to this:  "Rock and Roll's what made me a bad seed, Rock and Roll's what did it to me, baby!"  After the both of us crack up laughing, he says, "oh man, I'm so glad I got to say that."