San Francisco and The Field

Dan and I have been friends for over twenty years.  I met him on the other coast when I was 19.  The night we met we got very drunk and did things together which he gleefully reported to me the next day over a hung-over breakfast.  Things I will not ever repeat.  To anyone.  Ever.  Over the course of our twenty-plus year relationship, we have been roommates, best friends, have broken each other's hearts, and have barely been on speaking terms.  As of this writing, we are very good friends, and Dan offered, out of the kindness of his heart, to take me to his favorite San Francisco place, Crissy Field.  Dan works in the oil industry and is incredibly active, skiing, running, biking, surfing, and doing whatever else he can think of in his free time.  To get to Crissy Field, Dan drives through the Presidio, an area which is preceded by woods and consists of a vast expanse of sturdy yellow buildings, all impeccable and bright, which Dan tells me has a history of its own. 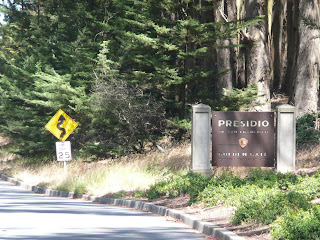 "The Presidio is one of my favorite spots. If there was no Presidio, San Francisco would be less cool. Historically, it was the gateway to San Francisco.  It is an old military base.  It was abandoned in the eighties.  The buildings are all apartments, rented out by citizens and taken care of by a trust.  The trust does not allow building here and the only businesses here are sustainable, green businesses."
Dan and I find a parking space and walk down the beach toward the bridge. There are people playing in the water and sitting on the beach.  All kinds of birds are flying about the various marshes, and people walk and run by with their dogs. The fog has lifted and the Golden Gate Bridge is clearly visible.  The Field, the view, and the day are just stunning. Dan takes the opportunity to tell me about the nature of the San Francisco person.
"This is a good running and walking place.  San Francisco attracts certain kinds of people, healthy, outdoorsy, successful......or not.  There is a lot of outdoors stuff to do here.  Though I am sure there are a lot of people who move here who don't like the outdoors.  But you never see those people because they are indoors.  They don't go out."

For as long as I have known Dan, he has been this type of conversationalist.  He becomes so entertained by his own monologue that he will contradict what he has just said in order to amuse himself.  I consider it to be part of his charm, as I too, am a person who will say things for the sole purpose of entertaining myself.  We walk along the windy beach and Dan tells me about the history of Crissy Field and its important place in U.S. Military History. Like our relationship, Crissy Field has been used for many purposes over its history.  It was the first Air Coast Defense Station on the west coast, and between the World Wars, innovation pioneered at Crissy Field was pivotal to the air power which provided victories for the Allies in 1945.  Crissy Field is significant because it was where a lot of flying records were set and predates the Air Force.  Unfortuntely, by the time the Air Force was established in 1947, Crissy Air Field had been closed as a first line air base for approximately a year.  Dan goes on to tell me why San Francisco is home.
"I have lived here since 2005, and for me, it is the best place. It's a beautiful city, right on the water, has a good climate, it doesn't get too hot, and it doesn't get too cold either.  People are friendly.  It's a laid-back place. There is surfing, skiing, and all my friends live here now, except for you, which is temporary."
Ever since our most recent failed attempt at a relationship several months ago, Dan has been trying to convince me to move down to San Francisco from Portland.  He keeps telling me, "they are gonna LOVE you here!"  I have not yet told him that his indecision about our future was the catalyst for my decision to take my project around the U.S. for the next year.  Since I have been here, I have to admit, there is not much that I don't like, even the cold grey August weather is preferable to the heat wave the rest of the country is experiencing.  A couple on a rental tandem rolls by and Dan continues.
"It's a good place to ride a bike.  There are lots of bike lanes, they have critical mass here, and again, the climate is good for it because it doesn't get too hot.  Though, it is hilly, as you have found during your time here.  The cycling culture here is healthy because there are a lot of cyclists here who also drive.  That helps with bike awareness on the streets."
Dan lives about 14 miles away from his job and rides to work one day of the year, on "Ride Your Bike to Work Day".  I ask him about a community feeling in San Francisco though he lives outside of the city in Walnut Creek.  While he cannot be specific about what goes on in the city regarding community building, he does share what he knows.
"There are many communities in the city, not just one community.  A lot of neighborhoods, and in those neighborhoods there is a feeling of community.  A lot of good society building things going on in all the neighborhoods here."  As he says this, he looks across to the bridge and the adjacent Fort Point and continues, "I am 42, and looking to settle down and have some kids.  I would most likely stay in Walnut Creek because it has a small town feel to it.  It is close to my job, has buses, trains, and is close enough to the city, the ocean and the mountains.  I have lived in many cities all over the world.  Seattle, Portland, Honolulu, Guatemala, Antigua, (I know, it's and island), Pittsburgh, Spain, (I know, not a city), Denver, and here, in San Francisco, and this is the best city, absolutely, by far."
After Dan drops me off, I ruminate on the history of Crissy Field and the history of Dan and Spike. Both speak of various stages of usefulness, though have proven outdated when The Big Show actually arrives.  Ten years ago, the people of San Francisco got together the time and money to renovate Crissy field into the beautiful park it is today.  Its current iteration serves as a testament to San Franciscans' willingness to participate in community.  Similarly, Dan has been a forgiving friend and over the course of our many years and relationships has helped me be a better person than I thought I could be.  The existence of such a friendship is one which speaks well of both of us.  The history of Dan and Spike is not one of ultimate triumph, but of forgiveness, compassion, and trust.  This in itself is quite an accomplishment.  The Big Show will have to wait for another day.
Posted by Spike at 3:47 PM