Denver and the Architect

In the short time that I have been here, I have been impressed with Denver for many reasons:
Enter Frederic, a French Architect who decided to show me around the Capitol District in Denver. Denver is the centennial state. It was formed on the 100th anniversary of the year the U.S. was formed. In recognition, the Capitol was designed and built based on the Capitol in Washington D.C.

Much to my surprise, Frederic takes me down Colfax to begin our tour. To say that Colfax is an interesting street would be overly kind. In addition to being the longest commercial street in the U.S., Colfax is also a street that one might say has the character of a hooker the morning after a very long hard night. In a thick French accent, Frederic tells me why he loves the area.
"I'm European, so I'm not used to driving everywhere. I don't like suburban life, I like city life. That's why I picked the Capitol building, it's very central, and a very interesting neighborhood surrounds it. It is very diverse; both extremely poor and fairly rich people live here. I like the architecture, all of the nice houses, and some of the big monuments of Denver are here, like the Cathedral. People say Colfax is the longest commercial street in the country. That is why I think it is a very interesting part of the city, because when you are on Colfax you see alcoholics, you see drug addicts, all kinds of fringe people, and then you walk 200 yards and it is completely different. I take the number 15 bus that goes down Colfax just for fun, just to see the people."
Ah, yes. The 15. I have had the pleasure of riding that bus many times since staying outside of Denver in Aurora. Coming into the city every day to do research has been a widely varied and exciting experience due to Route 15. I have seen and heard things on the 15 and the 15L which have made me question if the air in Denver is indeed too thin for reasonable and logical behavior. As Frederick talks about taking visitors on the 15 for kicks, we walk down Colfax a few blocks, turn the corner, and are greeted by amazing and beautiful mansions.

"This used to be the place where wealthy people lived in the early twentieth century. They lived here because of the proximity to the capitol. If you see pictures of Denver in the early twentieth century, you will see mansion after mansion. There are some mansions left, but most of them have been turned into apartments or torn down. This is a nice example of the kind of architecture they did in the late 1800s. The lady who owned this house was married to a guy who made a fortune in gold mining. (Molly Brown) It is a museum now.   In the 1930s they built smaller buildings. They would either tear down the mansion or separate the garden into two pieces and sell half of it."


As we walk down the tree-lined streets, among the mansions and apartment complexes which tower over them, I wonder what type of work Frederic does as an architect. The city is a hodge-podge of different styles and eras of architecture. I won't even go into the monstrosity that everyone here lovingly refers to as "the cash register building". As Frederic tells me more about himself, I have to ask if he gets any work that excites him. 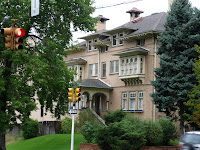 "I am looking for a job now. I lost the one I had months ago. It's really bad now in my field. I do small projects for friends, renovations, additions, but it's not very exciting. When I was in New York I was doing something very interesting, I was an exhibition designer for the American Museum of Natural History, designing scientific exhibitions for them. The pay was very bad, but the job was extremely interesting. I worked with scientific curators, and they would decide to make an exhibition on a topic, and then ask me and the design team to design an exhibition on the topic."
Frederic and I talk about the possibility of having to move to get a job, and where he would consider living in order to get one. He gives me his view of cities, how important it is that they be intentionally created for the people living there, and why he decided to move to Denver in the first place.
"I moved to Denver for a job, but I also like it, I had been here before. I lived in New York City and I lived in Paris, I wanted to live in a smaller place than those huge cities. On the other hand, being an architect, I have to be in a city, not in a small town, because then there won't be anything interesting to do. I thought Denver was a good balance between the two. All the apartment complexes makes for a dense and active place that supports life, bars and restaurants. I like living in dense areas because it is exciting. It brings stress to be surrounded by hundreds of thousands of people and constant noise, but it also brings some kind of excitement. There's a lot of places to go...bookshops, bars, cafes, lots of social life. I take part in that. I am a small cog in the movements, but I am part of it. I also picked Denver because of the weather and the mountains. As a city, Denver is okay, it's not really beautiful. Compared to New York or San Francisco, it's not as nice."

Frederic asks me where I from, and when I tell him Oak Park, he launches into a true-love speech about The City of Chicago and Frank Lloyd Wright's houses in Oak Park. I feel comfortable enough with him to ask why all the literature about Frank Lloyd Wright talks about rooms bathed in light, and every one of his houses I have visited (and I have been in quite a few) were actually quite dark. He tells me that the Oak Park houses were early in Wright's career when he was influenced by the architects he was working for, and if I wanted to see a good example of his later work, I should go to Phoenix, which I happily report I am planning on doing. On hearing this, his face darkens suddenly and he shakes his head disappointedly.

"I think what happened in Phoenix was sad. Frank Lloyd Wright's ideas worked so well in that landscape, and they absolutely didn't follow his example. They could have done something great and they've done something really mediocre."


This is the most negative I have seen Frederic during our walk around the neighborhood. I mean, the guy was giddy talking about Colfax Street and the number 15 bus, and now, the topic of Phoenix brings on a melancholia that scares me into wondering if I should go to Phoenix at all. Of course, I didn't choose my itinerary based on places I would like to go. At least I will be able to amuse myself by making fun of all the people who want me to meet them at their local Starbucks as their Phoenix favorite place. As I am silently planning my strategy for how to navigate the city of Phoenix, Frederic's mood shifts dramatically, and he tells me why he loves Chicago more than any other American city. Unfortunately, I am not going to Chicago.

"Chicago is a beautiful city. It is one of the rare American cities where you feel like people really appreciate architecture for itself, as opposed to New York, where they have nice buildings, but they don't care about them so much. They will tear them down and build something else. In Chicago people know what's nice, they have been living in it for all their lives, and they appreciate it. They still build very high quality contemporary buildings in Chicago."


From here, he launches into a architectural diatribe about what makes cities great and what makes them work. I have to confess, I am actually moved by his passionate expression.

"A city is much more than an addition of different houses. There is a fabric that needs to be taken into account. It's not easy. It takes some experience. People think only of their own house, they are not thinking about the whole environment of the city. It's human, you can't keep people from thinking that way, but a city is more than an accumulation of individual people, and that needs to be thought out.
There has to be a certain amount of direction to it. There has to be a central group of people who decide how its going to be. They did that in Chicago and in Europe, but generally, that conflicts with the perceived individual freedom of people."


This idea, that there is a fabric which must be considered in order to successfully create a functional environment for people to live in is not new, nor is it revolutionary. It is an ideal which started with the earliest architects in the oldest civilizations. Over time, this ideal shifted, and as the burdens of time, (people used to spend generations building cities) money, and cultural aesthetics weighed more heavily on civilizations, building became less about functional environments and more about adequate environments. In some cases, it is a difference of a hair's breadth, but as this difference grows along a trajectory geometrically and exponentially, we end up in the 20th century with strip malls and convenience stores.

We can look to what has come before and celebrate it with architectural "ode"s, but how do we choose the rest of our environment, or rather, who is choosing it for us? I don't have an answer for this, just more questions, none of which help me understand why anyone would want to tear down a nice old mansion and build a parking garage, or why the people of Phoenix decided not to follow Frank Lloyd Wright's lead.  All any of us can do is try and choose our environments which are within our means. Maybe that is why it is so difficult to create a fabric in the first place. We are all working with thread is of vastly different qualities and textures. With thread like that, the fabric is bound to be uneven.