San Francisco and The Search

After spending many hours combing the streets of San Francisco on bike, foot, bus, and train, I have come to what I believe to be my favorite place in San Francisco. I must first mention some things about the city that I noticed while traveling through it before I do that.

I compiled the list above once I started noticing a pattern regarding any of the items' occurrence. While these numbers are in no way intended to be 100% accurate, they are a pretty good representation of what I noticed and took note of once the patterns had been recognized.

On to more delightful things. My favorite place in San Francisco, hands-down, by far, was The Ferry Building. So much so that I went there three times. You might wonder why this is, why, out of all of the amazing things I could have chosen to LOVE in San Francisco, why, oh why, would I choose The Ferry Building? In a word: Food.
Let me tell you about walking in to the Ferry Building, when done properly, from the main entrance. As you walk into the historic old building, you are greeted by an aroma that says "welcome to cheese heaven". It is a strange message to be welcomed with, but, there you have it. The reason for this message is Cowgirl Creamery. This quaint artisan cheese purveyor was the busiest store in the building all three times that I visited. It is filled with Cowgirl Artisan cheese, pickles and other assorted cheesey delights meant to tempt even the most discerning cheese palate. The Sidekick cafe, right next door, is where I got an amazing grilled cheese sandwich; one which I will never forget. The Sidekick is a carry away cafe that serves all manner of delicious dairy delights. If you EVER go to San Francisco, make sure to visit this place or buy Cowgirl Creamery Artisan cheese. It is absolutely not to be missed.

Another miraculous delight I had the great pleasure of eating at The Ferry Building was a Salumi Cone at Boccalone. The first time I saw the meatseller's sign, I knew I had to go in: "Boccalone: Tasty Salted Pig Parts". The first time I ate the cone, I knew I would be going back to that building. I am not going to lie, meat has an incredibly strong and mysterious power over me generally, but this Salumi Cone (Salumi is Italian for cured meats), was so spectacular that by the third time I visited, I had decided to see if they would give me a double. When I ordered, the woman behind the counter told me that it was the first time in the store's short history that anyone had ever ordered a "double", but she was happy to provide me with one. You know how some people say that more is not always better? Trust me when I tell you that they were not talking about this cone of tasty salted pig parts. 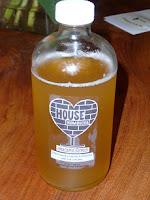 Another thing I have been doing while in San Francisco is searching out good local Kombucha. Of the many I have tried, House Kombucha has been by far my favorite. Not too sweet, yet flavorful enough to be refreshing, and perfect for washing down a Salumi Cone or Artisan Grilled Cheese sandwich.

On to dessert. I, of course, had two. First, I had a chocolate cupcake with meringue frosting from miette patisserie. It was, in a word, perfect. Appearance, size, texture, flavor, sweetness, it had it all. I even had to go outside to eat it, lest I appear insane with meringue all over my nose and mouth. The second dessert was a bit more simple, but great nonetheless. It was an organic vegan donut from Pepples. Yes, vegan, yes, delicious. The flavor was salted caramel, and the blend of sweet with just a bit of salted frosting on top of the perfectly moist and dense donut was quite astounding.

I also happened to go to Happy Girl Pickles on my third and final visit to the Ferry Building. Before I purchased a jar of their hot pickled carrots, I tried the Cinnamon Plum Jam, the Lemon Ginger Marmalade, hot pickled carrots, classic dills, dilly beans, and a bit of honey. All of them were organic, fantastic, and though I had meant to send the pickles to a friend of mine in Northeast Washington, I accidentally ate them before I could get to it.

Besides all of the great tastes and smells that The Ferry Building has to offer, the building itself is also quite beautiful. The long, continuous hall, the glass roof running down the length of it, and the architectural details make this building a joy to walk through. The building is also my favorite place because I arrived in San Francisco via the Ferry Building (on an Amtrak bus), and I left through it as well. The building has framed my experience in San Francisco. Due to this, in addition to all the delicious reasons I have named above, it will always be my favorite San Francisco Place.