San Francisco and The Canyon

It is a beautiful sunny day and I am going to meet Joyce outside the Glen Park BART station without a clue as to where she is taking me. Joyce is my BFF's cousin. She lives in San Francisco and works in the Public Health industry. She has agreed to take me to her San Francisco favorite place.

This particular BART station is about a twenty minute bike ride from where I live in the Mission. I realize on my way there that I don't know what Joyce looks like, outside of being Asian, which is not much help in San Francisco. I pull my bike into the bike stall and notice an Asian woman sitting on a nearby bench. She smiles at me and introduces herself. Joyce is small, with short black hair, wire-rimmed glasses, and a sunny disposition.

She tells me that she is taking me to Glen Canyon Park, a canyon in the middle of the city. As we walk to the canyon, Joyce tells me that she did not discover the place until several years into her time in San Francisco. She says that when she found out about it, she was bitterly disappointed that she had not known of it sooner.

The approach to the canyon is stunning. Beautiful outcroppings of rock formations, the undulating green of trees and bright spots of vibrant color line the canyon from crest to crest. As we walk, Joyce points out different plants and tells me about the birdsong that happens in the mornings. She knows the birds, plants, and rocks by name, and she tells me which flowers I can get nectar out of. She points out the river that runs through the canyon, and talks about the trees she has planted in San Francisco when she volunteers.

I don't think it's going out on a "limb" to say that Joyce loves the outdoors ardently.


As we walk through the canyon, Joyce tells me where else you can find certain plants, and that, even though some of the trees in the canyon are not native, she likes them anyway. After she says this I smile to myself. Joyce is earnest in much the same way that Joe was, and the more we talk, the more her character charms me.

Joyce takes me to a small tree-covered area where she has had picnics with her friends. This, she says, is her favorite place in the canyon. She tells me that she tries to get all her friends into nature, and brings people to the canyon all the time, but mostly, she loves walking through the canyon by herself in order to be alone with her thoughts.

"This is why Glen Canyon is so great. I can take off during the day and visit here from anywhere in the city. There is something special about walking in nature. We are so lucky to have this park here. I can just hop on the Bart or ride my bike, and it doesn't take long to get here from wherever I am." 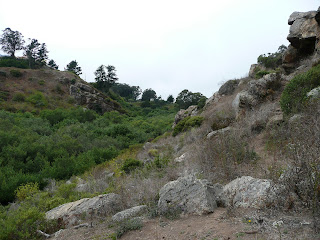 I tell Joyce about my hike in the Marin Woods, and she tells me that while she loves the trails there and has even done some volunteer work on them, she feels badly about the gas she has to burn in order to get there. I mention The Joy Metric to her, but she doesn't seem too impressed. I have a feeling it is because I didn't describe it appropriately.

I am humbled and impressed by Joyce's adherence to her high environmentalist standards. Mostly because I am a stranger to this type of strict devotion. She is incredibly conscious about her impact on the world. In stark contrast to the average American, Joyce seems to live her life with measured and well-considered strategies.

As we walk through the park, Joyce points out a building and tells me that it is a nursery school. She has walked through the canyon on days when the kids were out in the woods doing experiments and observations. As we approach the building, I note that it looks badly in need of some type of repair. Joyce agrees, but sees it in a slightly different light.


Joyce sees this school as a prime example of how San Francisco is forward thinking (the school was formed in 1970). She sees this as just a small part of a city that uses every bit of space in an intentional and sustainable way.

"I like the fact that San Francisco is dense and people can walk from place to place. I was a bit clueless in grad school, I didn't see that cities should be dense and built up. My initial inclination was toward everyone being able to have a nice backyard. But, if you think about it, that's not sustainable. It's not a city then. Share the neighborhood park instead of staying in your own yard. That is much more civic-minded anyway."
As we walk back to the BART station, Joyce points out some local eateries I might try before I head back to the Mission. We say good-bye at the station, and as I walk through town, I think about context and the significance of the presence of a canyon in the middle of the city. It has been great to see this place through Joyce's eyes. Though I will never remember the names of all the rocks, flowers, trees and birds, the canyon's position in Joyce's life will stay with me. My assumption about her standards being environmental was short-sighted. It seems that Joyce's standards are so high that they are more moral than environmental. More universal than personal, and more inclusive than exclusive. In Joyce's world, there is room for everybody.
Posted by Spike at 4:14 PM