San Francisco and The Joy Metric 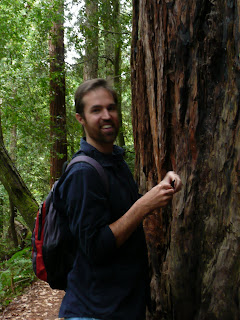 I met Joe at a Green Drinks event on my first day in San Francisco. It was a loud and incredibly crowded event, but I recognized a kindred spirit in Joe; he was the only other person in the room wearing fleece. He also had written that he was hoping to move back to Oregon on his name tag.

It turns out that Joe is from Oregon, works for the EPA doing air pollution enforcement, and is hoping to move back there in the next six months. Joe's first choice was to take me for a seven mile trail run. I used the convenient excuse that I have no running shoes with me, so instead, Joe decided to take me on a hike in the Marin Woods.

Joe is a tall, handsome, well-spoken young man. Joe is also an incredibly soft-spoken young man. I ask him if he can raise his voice a bit so that my recorder will pick his voice up, and he replies that he doesn't know if he can. In his quiet and humble voice, Joe tells me what the woods do for him.

It's a spiritual place for me. It connects me more to who I am at the base. When I am hiking by myself out in the woods, I imagine the perspective of the tree that's been there for a hundred years. It has seen so much pass by it. I like to hang out with that perspective. I used to hike really, really slowly. Just stop in a lot of little places to see how it felt to sit there, or to see what I could see. Lately I have been running through the woods. It feels really good in a different way. I don't need to stop to observe because I am part of it. It is more about exploring and knowing the woods around me and knowing my place.

I have read about the EPA getting shut down, so I ask him what he thinks. He tells me that both Michelle Bachman and Newt Gingrich have said that they would do it if elected president. Evidently, Gingrich would replace it with a "voluntary" EPA with no mandatory regulations. After he delivers this information, he offers, hopefully:
I bet even those people care about having drinking water that's safe to drink. If they travel to L.A., or  talk to people who live there, they would see that people are really impacted by asthma and respiratory problems from air pollution and all the other kinds of pollution. So even those people who say they want to shut it down, I don't think that's what they really want, they just don't want the new regulations coming out that regulate green house gasses.

I ask him if this type of opposition gets his dander up and he replies that it "kinda bothers" him. He also adds that it is annoying when people don't believe in the job you are doing, but he doesn't really seem all that upset about it.  He says it is disheartening. He also says that your desire to save money as a business owner should be balanced with the need of other people to be able to enjoy clean air and water. Joe is incredibly earnest about all this. I am usually a pretty sarcastic person, but I can't bring myself to be so with Joe. I am worried I will hurt his feelings.

I ask him if he is working for the EPA because of his reverence for the outdoors. His response is incredibly entertaining, and reflects a stunning depth of character.

I have done research in pharmaceuticals. I quit that and did computer programming, but it was missing some sort of spiritual aspect. I had this vision that I was at my funeral, a closed casket, and someone gets up to the podium and they say, you know, Joe was a really good computer programmer. I'm in my casket, banging on the lid. I wanted some kind of connectedness in my work. I wanted to be a part of something more spiritually connected, but I didn't know what that was, exactly. I wanted it to be something that I cared about too, something I would be invested in on a personal level. Environmental work had those three for me.


I ask Joe if he commutes by bike. I am assuming that he does as he is a tree watching EPA-type guy. Again, I am entertained and surprised by his response.

When I first moved to San Francisco, I picked the place I was living so that I could bike commute there. I love bike commuting in so many other places, but I just hated it in San Francisco because I felt scared all the time, and angry. I am not good at it. (Anger) I find it unpleasant. At this point he asks me, "it is unpleasant, isn't it?" I realize that I am laughing out loud at his description of his reaction to his own anger, and I stop long enough to validate his observation and let him know that I am incredibly familiar with that particular feeling. After my laughter subsides, he continues.

Some subset of the population is in a mental state where it is not safe for me to trust myself to them. I don't want to give them that power over me. I have no control over that situation, except to stop biking, so that's what I did. I haven't bumped into so many angry people as I have in San Francisco. Even other bicyclists. 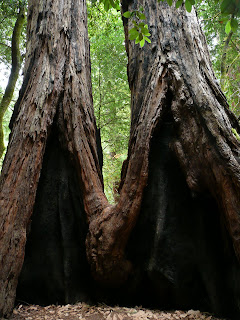 I ask him if he has observed a community feeling in San Francisco, and after replying in the negative, gives an example of a nearby town that he considers has a good sense of community.

In Mill Valley I think there is a sense of that. They have an event called "The Dipsea" that starts in the center of town, goes up 600 stairs to the top of the ridge through the neighborhood and ends not too far from where we're going to be. I was in the 100th running of it. It's on a trail and they have a bunch of different age groups. They give a head start based on age and gender. It is a contest for everyone. The year I ran it, an eight year old girl won it. It was so great. It is really a community builder.


Just as I am about to put away my recorder, Joe tells me that he has more to say. To this point, I feel like it has been an amazing conversation, but the next thought he lays down astounds me.

We should try and set up our lives so we can get as much happiness as we possibly can with as little resources as possible. It's not that you should limit your carbon emissions or your resource usage, it's that you should try and get a really high ratio of joy-to-c02 equivalent. The amount of joy you get out of your resources should be very high. If its low, then you're not enjoying it anyway, so what are you doing? We're supposed to really enjoy our lives, and if we're not, then we are not heading in the right direction.


I will remember this concept as one of the greatest things someone has ever said in my presence. I have even named this philosophy The Joy Metric, by which you measure how much energy you can consume based on how much joy it will produce. I tell Joe that I believe this to be a brilliant concept, and in typical Humble Joe fashion, he tells me that he is just happy to know that it will be attributed to him. That is probably because he has been using it for so long that it is second nature to him. Ironic that the reason that this man is amazing is because he doesn't know it.
Posted by Spike at 8:52 AM