Denver and The Saint 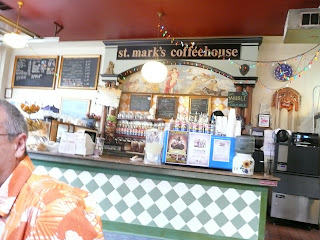 Doug is the third person I am to meet in Denver through the couchsurfer.org website. I have been impressed with the caliber of people I have met there, to the point where I am thinking there is no other way to go. I have arrived a bit early at Doug's favorite Denver place, St. Mark's coffeehouse, to get some work done and have some tea and breakfast. The coffeehouse is located on 17th street just east of downtown. It is a very large and well appointed space. The tables in the cafe are occupied for the most part by people working on laptops. The cafe is in a building which has had some work done to upgrade and insulate it, but the work has been done in such a way that its original charm has been retained. As I walk in and look around, I already know that I like this place.

I sit down at a table across from the counter and enjoy my green tea and breakfast bagel. The large garage door at the front of the cafe is open, letting in the Denver cool morning air. As I work at the table, I occasionally look up and around at what is going on in the mellow atmosphere of the cafe. It seems like most of the people around me are doing the same. At just about 11 am, A very tall man wearing khaki shorts, a bright orange Hawaiian shirt and a huge grin on his face walks in. I think I recognize him from his picture on couchsurfer, but I am not sure, so I walk up to him and ask if he is indeed Doug. He replies in the affirmative and tells me he will join me at my table after he gets his coffee. Doug is one of those people who smiles at you from his insides, and seems very excited to be doing what he is doing. I get the feeling, as we spend time talking at St. Marks, that this is generally the way he is composed. I ask him about St. Marks and its meaning to him, and he brightens.

"I went back to college in my early thirties to get a degree in Fine Art. I was going to the CU campus downtown. St. Mark's used to be down there on 14th and Market, right across from the campus, so that was my regular hangout. Sometimes twice a day I would go to St. Mark's and have two big lattes.  I think I fell in love with St. Mark's back then because it was a place where people hung out. There would be people sitting around, having intellectual conversations, and at the next table would be two mothers talking about children. It was just such an eclectic crowd. I thought that was pretty cool. Now that it is in a different location, I still come here a lot. It's so big city to me. Sometimes I walk in and it's like, "hi Doug! how ya doin'?", and other times they are just rude as hell to me. I like that. I get tired of the fake smile, memorization of your drink as a corporate strategy thing. They keep it real here. We all have good days and bad days and being honest about that is nice."


Doug and I slip into a conversation about art and architecture. We seem to be of like mind on most things art related, and have the same affinity for the quirky but charming environment that the owners of St. Mark's have created. 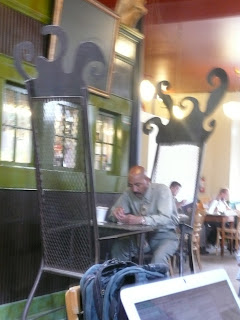 "I like buildings that are re-used over and over again, for hundreds of years, maybe, just re-using them for different things. That's one of the reasons I like St. Mark's. In their old place and this place, it is kinda funky, unpolished, the best form of a cafe. The owner makes these tables and he made those chairs (pointing to huge metal chairs in the middle of the cafe). He set up a bunch of indoor lights on an end table outside. They light the whole top of the building. It is really great what he has done here. It is cool too because they have a beer side and a coffee side, and as the evening goes on, it becomes almost impossible to find a table. This is a sizable space, and the last space was even bigger. The owners also show old movies one night a week. In the summer time, it is out in the parking lot. In the winter, it is down in the basement. It really builds a community around the cafe. It's not just their business, it's their life too. Both of them work here every day. They keep the business going because of their excellent reputation."


As we sit and talk the cafe fills up with college students, business men, and young mothers. Doug tells me how he ended up in Denver. Like a lot of us, he was looking to get out of the place he was in, and just ready to try something new. Moving to Denver turned out to be exactly what he needed.

"I moved here in '81 from Reno. I was transferred with a company that moved their operations here. I had never been to Denver and all of a sudden I lived here. I didn't even have a chance to check it out before I came. I was only 21 at the time and I desperately wanted out of Reno.  I made a lot of friends here right away. I joined an organization called The Group, which is a gay outdoor group. We did skiiing, biking, and all that sort of stuff, but we also played bridge and poker and other things like that.  That is also one of the great things about St. Marks. It is a very eclectic group. Gays, straights, all types of people work here and patronize the cafe."


Though it is technically a city, Doug tells me that Denver has a very small town feel, and that is why he loves St. Mark's. It has been a pivotal part of his Denver experience, and one that has enhanced the city greatly for him and many of his friends.


I ask Doug about the city itself and how it compares to other places he has lived. Judging from his general appearance and demeanor, he seems settled. He tells me that his quality of life in Denver is better than he thinks it could be in any other place in the U.S. for various reasons. 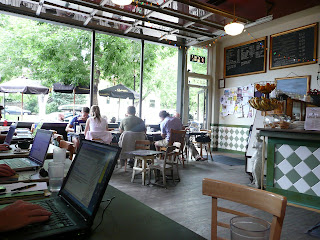 "I am a gardener/landscaper, that is how I earn most of my money. I have a set number of clients whose yards I visit every week or so and just maintain them. They give me free reign to make them pretty. Once in a while I take on new projects where I will re-design somebody's yard, or re-do their entire yard. I have no employees, so I always make them small projects. I do my art, and I also do pet sitting which keeps money coming in during the winter months. I actually had a show at St. Mark's recently and I also had two shows at their old location. Denver is a very relaxed city and an easy place to live. Denver is also a very easy place to live financially. I lived in California for one year, and it is shockingly expensive there. It is so great here because I can own a home for less than I can rent an apartment in most places. I have fantasies about living in Europe, but I will stay in Denver for the rest of my life."


As we are chatting, two of Doug's close friends come in and they join us. We all talk about Denver, the amazing chocolate chip scones at St. Mark's and the delicious ice cream at Little Man. They tell me what I should do and not do in Las Vegas, and what parts of the city I should I avoid at all costs. Much like Detroit, Las Vegas is a city to be taken very seriously.

After they leave, Doug and I talk more and before I know it, it is time for me to walk over to my next meeting in Denver. I feel very much like I have made a friend in Doug. He and his friends are the epitome of the life Doug described; warm, friendly and welcoming. In the following days, whenever I bring up St. Mark's, the people I am talking to respond with oooohs and aaahhs the way they might respond to the mention of a beloved old friend. The cafe is definitely a business that has made a lasting impression on many of the people who have grown up in, and moved to, Denver. As I walk down 17th toward downtown, I make a mental note to return, if only for another taste of their amazing chocolate chip scones. As I dream into my return a part of me also hopes that I might run into someone I know. I know it is a long shot, but in a magical place like St. Mark's, anything is possible.