Denver and The Contemporary Artist 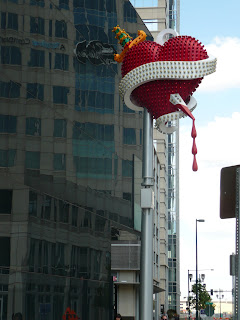 This story, the story going to the Museum of Contemporary Art in Denver, (MCAD) to meet my dear old friend Jessica at her favorite place, starts with me, not surprisingly, getting lost. I have the address of the museum and decide to just look for the street sign as I am riding my Denver Bcycle down 15th street downtown. Unfortunately, I become distracted and somehow miss not only the street sign, but the giant flashing red bleeding heart sculpture in front of the building. Yes, I am just that good at getting lost. Due to my ability to excel at confusion, I have developed the habit of allowing plenty of time to get lost and find my way to any place I go, which ends up coming in handy in this situation.

When I finally see the giant bleeding heart, a sculpture entitled, fittingly enough, "Toxic Schizophrenia", I have just a few minutes to make it up to the roof to watch the pigeons fly. You might be wondering just what I am talking about when I mention pigeons in a contemporary art museum of all places. 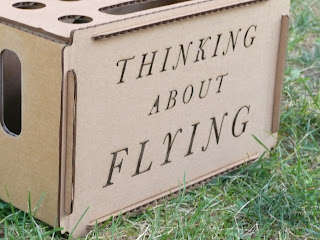 When I arrive, Jess is busy loaning out a pigeon to a patron. He seems very excited to be taking the bird to release it elsewhere. It is exciting to overhear as I am also set to release a pigeon at a location-to-be-determined-later. It is part of the project, Thinking About Flying. Jon Rubin, the artist who also created The Waffle Shop and Conflict Kitchen is behind the project. Thinking About Flying is meant to expand the artwork and the museum beyond the building's walls and include all areas the birds are released from, namely participant's homes. It is meant to make the participant a part of the artwork. I am a fan of this type of work. If it has the ability to include people who might not otherwise view or participate in art, I am all for it.

Before the much anticipated pigeon exchange takes place, Jessica and I take a seat on the roof of MCAD and she tells me about why it is her Denver favorite place.


"I really do love this building and I love coming to this building to work. I have always loved coming out on the roof top because this is the part of downtown I used to hang out in when I was growing up in Denver. It was all industrial, but now it's changed. The building has changed even since I've been here. Over the summer every window was blocked out and it was very dark inside. Now, there is all this light coming in; it has transformed. I like walking through the building, but I spend most of my time up here. I like the air, and the pigeons have added to that." 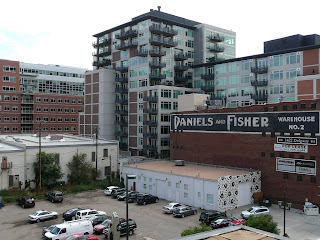 We talk about the pigeons and how they add to her enjoyment of the building. Jessica goes into detail about her involvement with them, and it is obvious that she has become attached.


"They have been here since July. They arrived here as young birds, between a month and three months old. There have been three of us that have been collaboratively raising them and getting advice from the artist and professional pigeon-eers. They stayed in the coop for two weeks and they didn't fly. So we would hold them so that they would get used to humans. We would hang out with them, feed them, clean the cage; the things you do when you are taking care of pigeons. During that time we named them all and got to know them. After that, we started to open the cage and let them fly. At first, they didn't really know how to fly. They had never flown outside of a coop, so it was an amazing thing to watch, to watch them figure out how to fly, how to land, and then, take off. Now they fly as more of a flock. Maybe some of them will fly just two together, but they fly all around the building. It is great to see."


I ask Jessica about coming back to Denver after having left and lived in other places, and if she thinks she will eventually settle here.


"I grew up in Denver, lived in Portland for 14 years, and in Knoxville for 3 years. Now I have a bunch of residencies scheduled in different places. I am not so sure that Denver will be my place. When I left Denver, I wanted to leave, but it's changed in the 17 years since I left, and there is a lot more interesting stuff going on here now. The one thing that hasn't changed though is the brutal sun."


Having come from Portland, where there was about one month of summer this year, and San Francisco, where I was wearing two jackets and a neck warmer at all times, this sun comment seems a bit strange. But, we are the product of our experiences, and if Jessica is sick of the sun, so be it. We start talking about the project and the pigeons, and while it is difficult for me to get the "flying rats" metaphor out of my mind, Jessica talks about he project and what the artist is focusing on with it. 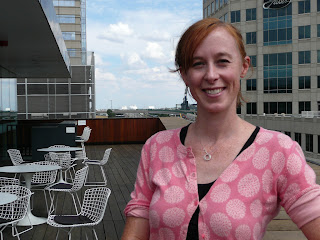 "With this project he is interested in breaking down the division between the museum and the outside. You come in, you take a piece of the project home with you, and you're connected to the museum in that way. The title is about the imaginary aspect: one is that we don't really know how homing pigeons find their way home. They guess that it's a mix between a map and a compass, but it has never been proven as to what is actually happening to help them find their way home. There is that imaginary thing. When people take the pigeon home, they just open up the box and they watch the pigeon fly away. They are imagining or thinking about it flying back, and we at the museum are thinking of it arriving. So it's about that imaginary space. That is the part that I like best about the project."


As she explains this process to me, I start to think about my project and how many people are imagining me flying back, and I imagine myself returning home. There have been times during this trip that my sadness and loneliness about being away has almost been debilitating, and I wonder to myself if that isn't the reason I get lost so much. Before my mind wanders too far down that path, Jessica tells me that one of the pigeons actually flew back to the place it was hatched, though it had never flown there before. It is amazing to think of all the things the creatures of this planet are capable of, while some of us have trouble spotting a gigantic bleeding heart.

Later, as I walk along the river with my pigeon carrier, I wonder how long it will take the pigeon to get back, and my mind starts to wonder the same thing about me. There are no guarantees, but I do know that the longer I am away, the stronger the pull toward home becomes. It is nice to feel that pull and know why it's there, and know that eventually, I will be home.
Posted by Spike at 10:29 PM