Denver and The Up and Coming

I contacted ceramic artist Jonathan Kaplan, founder and owner of Plinth gallery, to see if he would meet with me and show me his favorite Denver place. He agreed, and told me to bring a bike, as we would be riding around Denver's River North, or, RiNo District and seeing the sights. Jonathan's ceramics-centered Plinth Gallery, (get it? ceramics-centered?), is located in the RiNo District on Brighton Boulevard, surrounded by auto shops and other industrial-type businesses. I walked over to Denver Bcycle, also in the RiNo district, in order to grab a bike for the adventure. 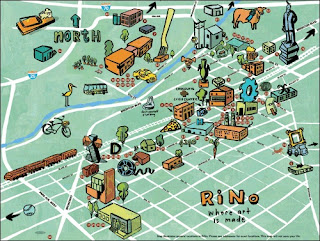 As I ride my bike to Plinth it feels like the adventure has already begun, though it is only blocks away. Due to the presence of an almost impenetrable railroad track, I have to ride 10 blocks up and through some difficult terrain in order to make it to Plinth. I arrive a bit early and wait outside. Several minutes later, Jonathan comes out with a travel mug of coffee in his hand and muddy crocs on his feet, talking about some great views of the city he wants to show me on our tour. I wonder briefly why he isn't drinking his coffee out of a ceramic mug, but ultimately decide it's unimportant.  He tells me he will be right back, and goes back into his gallery. I stand outside and breathe in the amazing fumes from Brighton Boulevard.  Jonathan appears behind me on his bike about ten minutes later, still holding his travel mug. Mystery solved.

With the sun shining down on us and the mid-morning traffic in full swing, we ride down Brighton and behind some buildings. Jonathan wants to show me all of the development that is happening in the district. We ride through alleys, up and down side streets, he shows me up-and-comers and established businesses of all types; art studios, galleries, architects and development firms. The buildings are for the most part renovated old warehouses. They are bold and bright and call attention in this industrial urban landscape.

More alleys. Jonathan has a love of alleys and I can't blame him. Alleys are a whole other world in cities where really great things can happen. I have done some of my best work in alleys, and my brother, David, has found some of the best junk in them. Alleys are the definition of one man's trash. Jonathan is clearly passionate about the direction the district is going in, and excited to see how it adds to Denver's draw as a city with potential. As I look around, I start to see the RiNo District in the same light. It's kind of falling apart, a bit neglected, but a large group of people in this city see it as a Denver treasure, and that is pretty cool. Especially when you see all of the creative work that is going on in this broken-down area of the city.

We ride by an old warehouse with beautiful early twentieth century limos sitting inside, then we go by a yard with ginormous tires in it. Evidently the man who owns the yard fixes these tires and sells them back to people who need them. At one point, I mention to Jonathan that I had earned a BFA in craft at OCAC. He asks if I am planning on getting an MFA, and I tell him that I have an MBA. As expected, he recoils in disgust. It is much easier to approve of people who are going to travel the path you have traveled. Either way, the damage is done. I was once a business major. There is really nothing I can do about that now.

We end up at the river. Jonathan tells me that when the river is high, it is really quite powerful. The view of the ball park and the mountains beyond it is really quite stunning. We talk about my project, where I am going in the US, and he suggests some places to go where I might find exciting art scenes and interesting people. It has been a very nice ride through an area that I would not have noticed if I was driving through it, but having Jonathan take me through RiNo was a great opportunity to see why the City of Denver is really one to watch. The people there are creating a large area of town which is nurturing and supporting Arts of all kinds. Even a former business major can see the value in that.
Posted by Spike at 7:35 AM