Denver and The Yoga Class

While I have been in Denver, I have, for the most part, been doing yoga on my own every day. That is why I was so excited when Aimee, a woman my dear friend Gina connected me with, wanted to go to a double dose of yoga class and then get cupcakes. Basically, an outing consisting of two of my favorite things in the whole wide world. 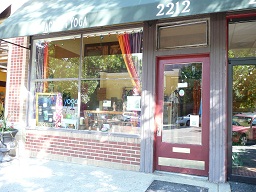 I arrive a bit early to Sacred I Yoga, which is located on a charming tree-lined street, and decide to sit down in front of the bakery next door and rest a bit. As I sit and enjoy some water, I notice that there are quite a few women going into the yoga studio with their children, which leads me to wonder if this isn't going to be a mother and child type situation. Not that there's anything wrong with that.

Aimee arrives shortly thereafter, we introduce ourselves, and go in. It turns out that I am in for an Anusara class, and there is a sub, Roger, for the teacher who is usually there. He welcomes me, I fill out a form and tell him about the project, and then, I go in to the studio. It is an exceptionally small but extremely warm space. I grab a mat and put it down next to Aimee's. After a bit of settling in, Roger comes in.

Roger takes us through the practice talking about the solstice, the importance of being aware of what we are putting ahead of ourselves for the next year, and being thankful for the place to which our past endeavors have led us. There is something in this practice for everyone, including a few moves I could not do without falling over a few times. Roger is also kind enough to tell everyone in the middle of a downward dog about my project. It  makes me happy in a nerd-girl kinda way, and as I further explain my project, I am thankful that we are not in the middle of a pose I would fall over in.

After the Anusara class, a woman named Meg who was in the Anusara class teaches a yin class. It is exactly what I need after riding a three-speed bike all over town and intermittently carrying a sixty pound pack on my back. All in all, the studio is really great, though small, with a nice feeling of community.

After, Aimee and I sit outside and eat our cupcakes, which are delicious. Aimee tells me why Sacred I Yoga is her favorite place.

"I love it because it's the first yoga place that I have found in Denver that's a real community, and it's not yoga for exercise, it's yoga because it's what you should be doing for yourself every day. All of the teachers there are inspiring and supportive and really good at knowing what your body should be doing, so they're good coaches, which is hard to find in a yoga teacher. They really know the anatomy, and I think a lot of that is because it is so Anusara-based. They know how to talk you through the details of every single pose. I have learned so much about yoga even though I started practicing in the mid-nineties."


Aimee has kids and travels for work. Before the class started, she had been talking with a friend of hers in the yoga studio about how little sleep they both get. I ask her how long it took her to find the studio, and how much she is able to practice.


"I went to my first yoga class in Denver eight years ago. I had a Ballly's membership at the time, so I went to the Bally's yoga. It was hard because it just wasn't set up to be conducive to a meditative yoga practice. There was a really good teacher there, he was an older man, maybe, I would guess seventy-something? I went to different places with friends, I have probably been to three or four. But I went with my friend Jane, the one I was talking to, to Sacred I. I haven't found any place like it and I am nervous to tell you about it honestly because the great part about it is that it is a small studio. It's so collaborative. I don't want it to get too big." 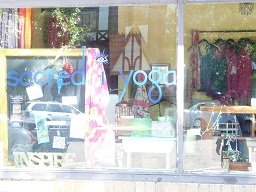 It is funny how we all want to keep good things to ourselves, even yoga studios. I ask Aimee if she wrestled with not bringing me to the studio, and in fact bringing me to another place that she might not mind sharing, and she replies that in a way, it was fate.


"The reason why I even brought you here was because literally the day that Gina sent me the email, I came here and Leigh (The owner), was walking in saying that she had had a rough day and that she needed to come the place she loved the most, and it just hit me. This is the place I love the most."


It is nice to sit with Aimee in the shade of the trees and talk about yoga and be incredibly human and selfish about it. We share a hatred of yoga Groupons which flood the studios we love, yet we want our yoga studios to stay in business in order to be there for us like ports in the storm. After we finish our cupcakes, we part ways. Just before we do, I ask her if there is anything else about Sacred I that she wants me to write. Her reply?