On yet another beautiful and hot sunny day, I meet Michael at Town Lake, or, Ladybird Lake, in Downtown Austin to go kayaking. I prepare by slathering on SPF 40 and donning shades and a baseball cap to cover my tender lily-white scalp. As I stand at the boat landing, hundreds of people jog, run, and walk by on the adjacent hike and bike trail. It is 9:30 a.m. on a Sunday, and the city of Austin is already out in force. 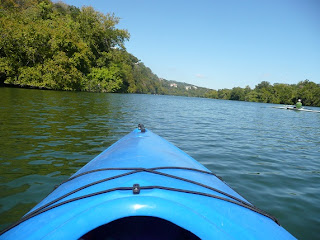 Michael is an older, heavy-set man who has lived in Texas all his life and is a lacto-ovo-pesco-vegetarian. Michael is not the first person I have met in Austin who does not eat meat, and this kind of boggles my mind, as the air in Austin smells of really good barbecue. It is to the point where I am vacillating between always wanting barbecue and being sick of barbecue all day long. I resolve this by eating it every other day.

Michael goes kayaking on the lake three or four times a week. He owns 11 kayaks and takes other people on the lake all the time. As we slide his tandem blue plastic kayak in, he notes the water level. It is low due to the drought. Just the day before, I was at a bar on another lake in Austin which was so low much of the sand bars were exposed and grass was growing on them. Every day, I ride over bridges with dried-up river beds beneath them. The sight of dried-up bottoms of rivers and lakes make the air seem hotter and the sun more violently destructive. I am all for the sun and exposure to it, but as I ride through the streets of Austin, I wonder if you can't sometimes overdo it.

As we glide across the lake, Michael tells me about growing up in Texas, being a bankruptcy lawyer, and hiking the tallest peak in the U.S. Michael is one of those people who has done a lot, and speaks in a manner which conveys his knowledge of this. He is exceedingly bright, accomplished, and he loves his lake. 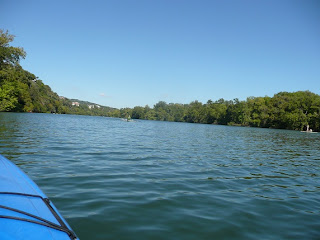 That is what he calls Ladybird Lake. He refers to it as"his", and in his actions, he communicates a humbling form of ownership. Once a month, he brings an extra empty kayak with him, tows it behind the one he paddles and fills it with garbage from the lake. On more than one occasion, he has towed a stranded paddleboarder or other water sportsperson through the lake's strong currents. He is on the lake so often that he knows where to find the turtles, the clams, the rocks, and the hidden places to go in the lake's several small alcoves. He has taken girlfriends to the lake, and has watched homes being built on its high ridges over the years.

As we paddle, he aims the kayak to pick up random garbage along the way, and as we pass PVC pipes along one of the edges of the lakes, he laments the rich people using the lake's water to green their lawns while most of Austin is on a one-time or two-time-a-week watering schedule.

We travel under the Congress Bridge and hear the hundreds of thousands of bats nesting there. In addition to the sound, there is also the sight of a cow sculpture hanging upside down from the bottom of the bridge, wrapped in wings, in homage to the bats' home. When I ask Michael about his love for the lake, he speaks plainly.

"This lake is great because it exists in city of a million people, but it feels secluded. There are some parts of the lake where all you can see is trees, lake and sky. It is a part of a large system of parks and trails and really gives the people who live here a lot of opportunities to be outdoors. Additionally, people really love this lake; it is an important part of Austin's development as a city. You can't come out to Town Lake, (he does not call it Ladybird Lake), and not fall in love with the city of Austin in the process." 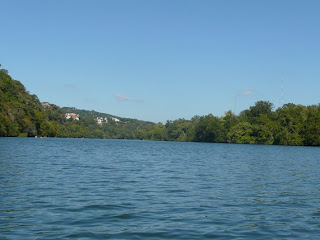 Michael and I paddle up and down the lake for about three hours.  It is sad to see the garbage that accumulates along its edges. Beer cans, water bottles, even Styrofoam cups float in the water, and as Michael diligently takes care of what he can, the remaining garbage serves as a marker of the carelessness of the people who use the lake. When we finish, he tells me we have paddled about ten miles. Until this point, I have been wondering why everyone has been telling me that Austin is a beautiful city. The endless strip malls and random architecture in downtown Austin is at best, puzzling, and at worst, atrocious, but after ten miles and three hours on the lake, I am beginning to see why so many people love it here. It is easy to forget about the strange and random planning of the city when you are silently paddling up and down Ladybird Lake, watching the turtles pile on top of each other in the sun and the birds taking flight as they run along the surface of the lake.

Like the weather, I am warming to Austin, and after this and a several of my other meetings, I am beginning to see the true character of Austin's people. I am finally happy to be here, which is just in enough time to miss it when I leave.
Posted by Spike at 7:24 PM