Austin and The Graffiti Park

I decided that since I was in Austin I would give Craigslist another try. The first meeting I garnered from this decision paid off in spades. A contractor named Bruce asked me to meet him at the graffiti park on Baylor and 11th. He decided to spend the day painting a floor in one of the areas where graffiti had been painted on the walls. As an artist and a person who believes that graffiti, like ball playing, belongs outside, I was ecstatic.

Of course, it is still very hot in Austin, well, hot to me. To most of the people who I speak to regarding this environmental travesty, Austin is actually very enjoyable at 90 degrees in the shade. Ugh.

I arrive early enough at the graffiti park to give me some time to grab a bite before we have to start.   Unfortunately, I have no lock for my bike yet, so I hide it in order to go into a local cafe and grab a chicken curry wrap. 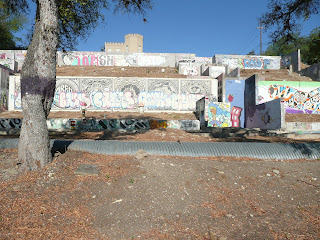 After I finish my wrap, I walk my bike to the graffiti park to wait for Bruce. Some of the graffiti at the park just floors me, so I take some time to scout around and take pictures.

Bruce had emailed some images of where he wanted to paint, but I couldn't find them on the first level of the remnants of whatever building used to stand on the hill. I look up and wonder if the space isn't  higher up, and wonder how I might get my bicycle up there if it is. There is no way I was going to be able to leave the bicycle at street level if I was going to be 40 feet up. 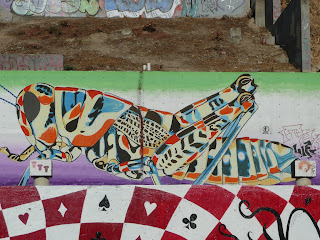 Soon enough Bruce arrives in his big white truck, with a design on the doors that read: "The Bungalow Doctor". After spending four and a half years at a place where the people took their "Doctor" titles very seriously, this name strikes me as funny. I love looking back at stuff I used to care about.

Bruce smiles broadly and waves at me, and tells me to lock my bike up to climb up with him. When I tell him I don't have a lock, he runs back to his truck and grabs me one. 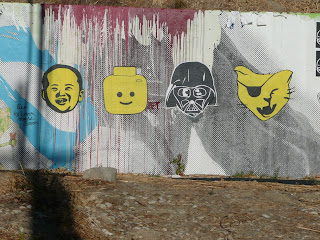 As I had suspected, the floor we are to paint is about forty feet up. I am not generally afraid of heights, but getting up there the first time while carrying the necessary equipment turns out to be quite a challenge.

Bruce had narrowed it down to two spaces. One had brightly painted graffiti over most of its walls, the other space, more of a work in progress. He chooses the former to the two and begins sweeping the huge amounts of debris from the space as he tells me why he chose this location as his Austin Favorite Place.

"This is a great Austin place because it is so creative, and invites anyone with something to say to express themselves. The lady who owns this property okays the work for the most part, I think. When I sent her the pictures of where I wanted to paint and told her what I wanted to do, she got right back to me. She is excited to see what it looks like when I am finished, so I told her I would send her "after" pictures." 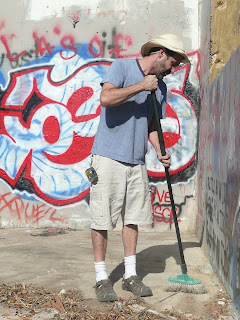 As Bruce talks, he grabs a shovel and starts trying to chip away at some unidentified goo that has stuck itself to the floor of the space but good. After he gets some of it up, he decides it is good enough and moves on. Bruce is a wiry, weathered-looking older guy who has worked as a contractor in the past but is now working putting together model homes out of salvaged materials until the economy improves. He lives on modest means in East Austin by renting out the spare rooms in his home.

"It is great that I was able to get my house for so cheap. I have bought, remodeled and sold three other houses doing this. I usually buy them in pretty bad shape. The house I am living in now didn't have a real kitchen or bathroom to speak of. It is a slow process, but it works for me." 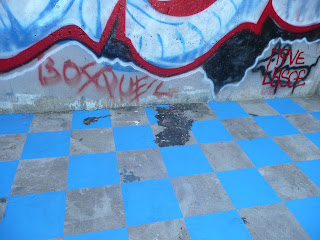 After we lay down chalk lines, Bruce and I start painting. He gets me a sun hat from his truck and we paint diligently, bright blue squares in a checkerboard pattern. It is about this time that I realize that the only sunblock I have brought is some fancy brown stuff for my face. Something is better than nothing for this white girl, so I squeeze out all the lotion I can and apply it liberally all over my exposed skin. The upside to this is that I can barely feel it, as it is for my face. The downside is that it is kinda gross.

At some point we take a shade break and walk over to the side of the building wreckage to sit under a tree. As we sit, I cannot believe how good it feels to be a few degrees cooler. Bruce opens up his little cooler to reveal chunks of pineapple which have stayed miraculously cool through the morning as we have painted. I ask him how he has energy to do this type of thing after working at a physical job all week.

"I have a lot of energy. I get something in my head and I just go do it. I don't stop until I am finished in some kind of satisfying way. Of course, I have to be careful to eat, as I sometimes go too long without, then I kind of crash, but I have tons of creative energy, which is why I am so drawn to this place and why I love Austin so much. The creative energy in Austin is overt."


As Bruce speaks, his eyes light up and he emphasizes each sentence with a broad smile. It is clear he is very excited to be painting a blue checkered floor in this graffiti park, and as he gulps down his pineapple, he tells me more about his life in Austin.

"I'm a social dancer. I go out dancing as much as possible. I have even traveled to dance. Austin is great for that because of all the live music here. It is great to be able to meet people in this way too, because you get to know them on a whole other level than you would just meeting them at a club or something. When you dance with someone, it is a form of communication. You can tell a lot about a person by how they dance."


The sun isn't getting any cooler, so we go back to painting. Due to the nature of the project, it is a bit tedious and takes us quite a while. At one point, an older gentleman and his son drop by. Bruce had met them the day prior while taking scouting pictures and told them what he was planning to do. They hang around a bit talking to Bruce, then offer to go get us some drinks. When they come back, Daniel, the son, paints a square. When he asks how he is doing, I tell him that he messed it up already, but not to worry about it. He recoils in horror, looking at his square, and asks, "really!?!?!" Man I love gullible people.

Eventually, they leave, and we take another shade break. This time we are able to lean against one of the walls as the shade its throwing is providing good cover from the relentless sun and heat. As we sit there, I look down at the street and notice someone waving at me. I wave back, thinking, "wow, people really are friendly here," then I point out the waver to Bruce.

"Oh! Those are my friends! I didn't think they'd make it!" Bruce waves wildly at his friends and tells me the story of how one of them is his dance partner, used to be his girlfriend, and now, she and her partner are his best friends. As he is telling me a greatly extended version of the short story I have just written, I am thinking that I am just happy to have help. Painting in the heat of the Austin sun is a novelty that wore off at about 11 am. 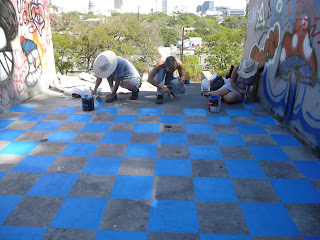 Bruce's friends, Caroline and Louise,  join the painting party, and soon after, we are finished. It is a glorious thing, and it is nice to be around three people who so obviously care for each other greatly. What's more, I feel very welcome around them. Not once do they share an inside joke that they don't explain to me, and their ease with each other is graciously extended to me.

As we clean up and start throwing things down to Bruce to put in his truck, Caroline invites me to go eat with them. I immediately accept, and feel greatly complimented that they would want to include me. The evening ends with the four of us piling up in a hammock and looking at the stars in Bruce's backyard. The stars are sharp and bright and the air is finally cool. As the hammock swings back and forth under the weight of the four of us, I start to understand why Austin is loved by so many. Especially considering the high caliber people you are able to find on Craigslist.