"Let me make it official and put in my tooth." So says Dave as he gets ready to take me to his favorite Austin Place, The Turtle Pond at The University of Texas in Austin. He speaks briefly about the judgment he has received when not wearing his tooth, calling it "the one thing that invites judgment from all social classes". I agree, and think back to the glorious day I encountered my high school boyfriend without one of his front teeth. Ah, memories. Dave pops a tooth into the front of the roof of his mouth, and off we go. 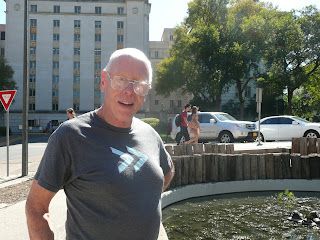 Dave is a tall, older gentleman who has lived in Austin for 20 years. He tells me that Austin, like many cities, is much more interesting if you can go other places during the summer months. Judging from what I have seen and felt so far, I have to agree with him. Although, in each of the cities I have been to, someone has taken the opportunity to tell me, "It's too bad you didn't come one month earlier/later, when ...."  Just fill in the blank. I am always missing something somewhere.
As we walk from his apartment to the University of Texas campus, I ask him what about The Turtle Pond makes it his favorite place.
"It wasn't originally designed as a turtle pond. I think it was a biology department experiment to research how water cleans itself. It's been there for a while. At some point someone introduced some turtles, and they have just multiplied. Now there are bunches of them. It's a nice, quiet area behind the main tower, and the students like to sit there. It is an unexpected little oasis in the middle of the city. The University is filling in the city with stuff like this." 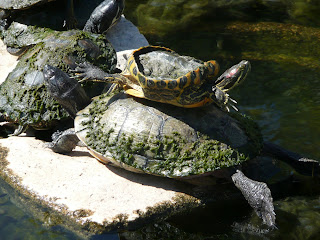 There are turtles piled on top of turtles on rocks, sitting in the sun. There are turtles swimming around in the muck, sitting on the edge of the pond, and generally just doing turtle-type stuff. It is amazing that so many live in such a small space. That small space is surrounded by buildings on each side of it. One of the buildings is the tower where Charles Whitman shot and killed 16 people and wounded 32 others on August 1st, 1966. From what David tells me, many of the students and citizens at that time also had guns and due to their help, the police were able to bring down Whitman much more quickly than they would have otherwise.
After the turtle pond, David walks me around campus a bit and tells me that he has made his living via small businesses and special projects. One such project was collecting all of the letters written to Lyndon Johnson by the relatives of soldiers killed in Vietnam. He hired actors and re-enacted all the letters and made a film of them.

David stays in Texas, he tells me, because of the swimming and the libraries.

"There are seven or eight libraries on the campus. It also has the Ransom center, with the largest private archive in the United States connected to a University. They have the first photograph ever taken. They have a copy of the Gutenberg Bible. " 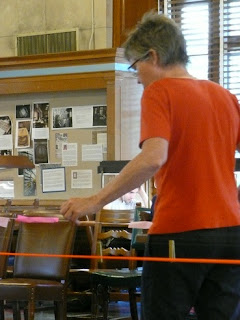 David takes me to the Architecture Library on the UT campus, and as we walk in, I hear a strange noise that sounds a lot like several violins coming in tune together. The noise is reverberating off the stone walls of the enormous room and creating a surreal and vivid musical experience. We sit down and watch a woman carefully walk up and down the length of the library between metal wires, running her fingers along them to elicit these sounds. It turns out that the University is having a symposium on Music in Architecture and Architecture in Music. The sound is mesmerizing, as is the movement of the woman making the sounds reverberating off of all the walls.

We leave the library and walk back across campus toward his apartment. David tells me that he camps and rides his bike in Europe and travels to California, Washington D.C. and New York during the summer months. When I ask him if his plan is to just keep doing that, he replies, "as long as I can. I'm 67 and I can see the back hoe creeping up behind me." We both laugh and he tells me it is something his brother said to him once.


I have met many people in the last several months of all ages who are afraid of death and reticent to talk about age at all. This is probably the first time I have ever heard anyone make light of their advancing age in such a comfortable way. The more I listen to David the more I have to disagree with his original hypothesis about the city of Austin. It is not because Austin is not interesting enough, it is because David is attempting to remain interested. I guess it is easier to make light of death when you are thoroughly interested in your life.
Posted by Spike at 3:31 PM