Portland and Men of Specifics

I arranged a meeting with Rusty, the husband of a friend of mine from my yoga studio.  He decided it would be a good idea to go on a bike tour with a company he helped along a bit in their gestational phase, Pedal Bike Tours.  Rusty is an older gentleman, and retired, but like his wife, in incredibly good shape.  I mean, these two could be models, truly.  Much like me, Rusty is able to start a sentence with, "when I worked in this industry, or that industry, or the other industry"....The guy has done a lot of different  things with his life, including designing and leading bike tours for Pedal Bike Tours.  As a bike commuter, I was of course, a bit skeptical.  I have been riding my bike in this town for roughly twenty years, and figured I had seen all there was to see of this city from the saddle of my bike, recent explosive urban development notwithstanding.  These assumptions, the ones I make where I am assuming that I know everything about something, are usually the most quickly and easily decimated.

The first thing to surprise me about this experience, though I admit it probably shouldn't have, was that I would be using a rental bike.  Immediately, this put me in a completely different head space.  Though I love my own bike dearly, it is much like a well-used and incredibly quirky appendage.  I ride it roughly 30 miles every day for my commute, some days more when I have errands to run or some type of therapy to attend.  In order to do this, I must care for this quirky appendage on a daily basis.  This takes a bit of patience, a bit of know-how, and a little bit more patience.  Oh, it also helps that I have a very nice little bike shop in my neighborhood, 21st Avenue Bikes, where they are dedicated to making it awesome.  So awesome in fact that one time they fixed my bike for me after the shop had closed so that I could commute with it the next day.  Yeah, I know, pretty freakin' awesome. 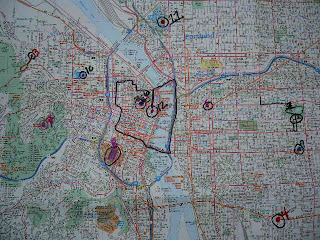 Rusty picked me up and we drove over to Pedal Bike Tours.  After Rusty introduced me to Todd, the owner, and showed me the bike Todd rides his dog around in, we talked about the tours and the bikes and, of course, beer.  Beer enters into almost every conversation in the Portland scene, lately.  It is no wonder so many men here have pot bellies.  In fact, you can't swing a dead cat around without hitting at least four breweries in this town.  Dave, a young man and also a lover of fine Portland Beers, would be taking us out on our tour that day.  A tour of Historic Downtown Portland.  Coming from the mid-west, this title struck me as a bit of an oxymoron, but, if there is anything science has taught me, over and over again, sometimes embarrassingly so, it is to keep an open mind.  After showing me how easy it is to shift gears and adjust the seat on my worry-free rental bike, Dave handed us our bright blue bike helmets, (he misjudged my embarrassingly large head, most probably due to my almost dwarf-like stature, and gave me an extra-large helmet), and we journeyed outward, into the adjacent parking lot.  He gave us the low-down on how to ride our bikes in a small pack on the city streets of Portland, which was quite endearing.  He showed us the proper way to signal, told us not ever to go through a red or even a yellow light, and let us know that if there is a flaw in Portland drivers, it is that they are too kind to bicyclists, often stopping illegally to let us pass.  At the time, I thought of a few other flaws, but that type of information is for another day, clearly.

We were guided through SW Portland, (Portland is divided up into quadrants, for the most part, the east and west side divided by the Willamette-don't-you-dare-pronounce-it-incorrectly-river, and north and south divided by Burnside street), and as we started pedaling, the sun burst forth through the grey and warmed us, a good omen for a three hour tour through the usually-rain-soaked streets of Portland. 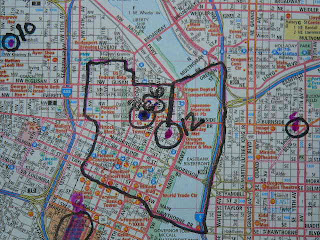 We rode across Burnside, through China town, through Northwest, stopping on occasion to look at amazing parks, buildings, gardens, and, of course, breweries.  We learned about the evolution of the Pearl District, how it got its name, and unfortunately, the only thing that I could add to that conversation is that I miss the great parties people used to throw in the warehouses, which have since been converted into condos.  The great thing about this tour was that our tour guide, Dave, and Rusty, for that matter, are both full of information regarding the city of Portland.  Between the two of them, I found things out that I did not even realize that I wanted to know.  Additionally, it didn't seem as if Dave was following a script at all...in fact, he seemed pretty stoked to be doing it, the tour guide gig, that is......leading two people who know Portland pretty well around Portland, telling them, about..........Portland.  Talk about preaching to the converted.

We rode through Southwest, through the Portland State campus, down to the waterfront and under the Marquam bridge, where Dave told us a whole bunch of very interesting stuff I couldn't really hear due to the highway traffic above.  While we were stopped under the bridge, we ran into a couple on a tandem rental from Pedal Bike Tours, and Dave tried to point out to them that we were all on Pedal Bike Tours, but as they most likely couldn't hear him, they politely smiled, nodded, turned the tandem around, and rode away.  We would later find out that this couple had rented this bike in order to teach the woman how to ride, as she had never been on a bicycle before in her entire life.  Hard to imagine, but true. 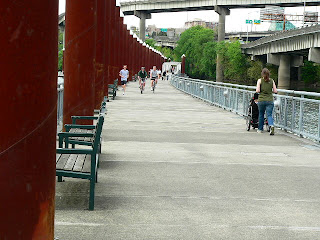 Dave guided us down the west bank of the river, pointing out various points of interest and urban legends along the way, and then we went over the Hawthorne Bridge to the East Bank Esplanade.  Ah, the East Bank Esplanade.  According to Dave and Rusty, quite a bit of planning went in to this area in order to: decrease crime, eliminate dumping, beautify the river, and provide a path for walkers, runners and bicyclists of all sorts to get around on.  An amazing feat that it actually accomplished most of these things quite admirably.  The floating pathway is a favorite of both Dave and Rusty, and Dave quoted a number, (or was it Rusty?) which I am not presently recalling, the length of feet which they had to make the poles to reach the bottom of the river, which is quite deep in places.  I think this, more than anything, is why tours are kind of lost on me.  Dave had a million interesting facts about the bridges, parks, buildings, etc. in Portland.  The highest this, the oldest that, the longest the other thing...but honestly, I have no head for specifics.  I am more of a general "that's cool" type of appreciator of things.  Like, "wow, that is a cool bridge," or, "man, that is incredibly tall!"  I am much better at appreciating things when they  are not being compared to taller, shorter, smaller, newer, or otherwise comparable objects.  That way, it is easier to appreciate the information in the moment, and then release it into the ether, where it belongs.  Dave and Rusty are Men of Specifics.  They know very specific and factual information about a lot of things.  My wasband was also like this; he used to study the Encyclopedia Brittanica when he was young, back before we had The Google.  This is the other reason I find it easy to not retain specific information.  I find there is always someone around to retain it for me.  People who actually like retention.

As we rode down the Esplanade, we passed a couple of what looked to be small, old fashioned cars, but what turned out to be little four or two-seat pedal power mobiles.  Sorry, that's the best I can do on description.  They looked kinda ridiculous, as did the people in them, attempting to pedal across the Esplanade.  These pedal mobiles were a bit bulky, clearly not easy to maneuver, and made the people inside them, whomever it happened to be, look like tourists.  Poor tourist people.  Dave dutifully pointed out that when they rode across the steel bridge on the lower platform they would take up the entirety of the deck, making it impossible for others to pass in either direction.  Really funny, unless you happen to be on your way to or from something that is or, was, important.  That is one thing that we bicycle commuters have low tolerance for; people, either on sidewalks, in cars, or, on other bicycles, who slow us down on our way to where ever we are going.  You commuters may argue, but deep down in your cyclists soul, you know it is true.

On our way back to the shop, we realized that we were actually running a bit ahead of schedule, so Dave took us around to see a couple more cool things, like, breweries, and then we went back.  All in all, it was a pretty victorious trip.  I had gotten to see things on a bike I had never ridden before, realized how similar Dave and Rusty were despite their apparent age difference, and, of course, learned a lot about Portland which at the time seemed pretty spectacular, though now, I cannot remember exactly what it is I learned.  So, as Dave put the bikes away, Rusty and Todd started talking about this and that, the touring game, etc., and then, Todd went to the fridge at the back of the store and pulled out..........a Pabst Blue Ribbon beer.  Ah, yes, because when it comes down to it, all this microbrew stuff is great, all these local breweries pretty spectacular, but nothing really beats a Pabst Blue Ribbon.

Nope.  Not even I believe that one.