Portland and the Coffee Man

Generally speaking, when I talk to someone, or meet them at their favorite place, I am moved almost immediately, or something comes up where I am thinking, "this is basically writing itself."  Meeting Mark Stell was not like this.  In fact, in almost every way, he is pretty average.  A middle-aged white guy, brown hair, a bit on the tallish side, he does not really carry himself with the weight of someone who is making big changes in the world, nor does he speak of himself in this manner.  In fact, his favorite place is such because it is functional.  Not really that exciting.  He talks about the coffee market with a detached but concerned tone.  But, when you get him talking about helping people, and organizations he is involved with, he changes, quite remarkably. 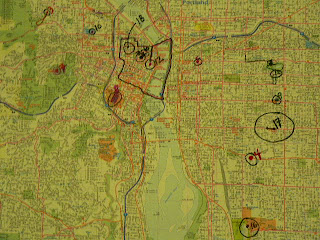 Mark Stell is the owner and founder of Portland Roasting Company.  He has lived in Portland for as long as I have, and went to Portland State around the same time as me.  Mark loves Silk, the Vietnamese sister restaurant to Pho Van, in the Pearl.  He brought me there to taste their authentic Vietnamese food and tell me why this place is special:

"I bring people from out of town here all the time, it is a really nice place to get authentic Vietnamese, and people don't have access to this type of food in most areas of the U.S."  He adds, "When I am crazy busy, not enough time to eat, I come down here because it is pretty fast and the service is really good."


He talked at length about starting out in the coffee business, and how saturated the Portland market is.  I asked why he initially got into coffee, assuming he was going to say that he loved coffee, or sustainability, and saw an opportunity.  But his answer surprised me.


"I got into this business because of the people.  There are so many entry points into the coffee market; it is the single biggest employer world-wide, and I have had the opportunity to meet so many great people, from the time I was just starting to source beans from small farms in South America, to now, as Portland Roasting has just been awarded the coffee retail and service contract for the Convention Center." 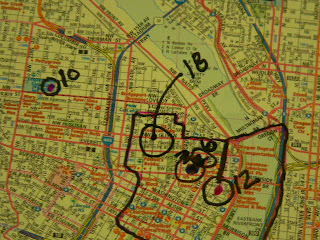 In fact, Mark did not even drink coffee when he got into the coffee business.  As he sipped on his Thai coffee drink he explained that for him, coffee is more of a ritual than a habit, that he loves to sit and enjoy a cup of coffee (or two) in the morning as he is preparing for his day.  He went into detail about his belief that within about twenty years, coffee will be financially beyond the reach of most average people due to the earth's temperature rising and coffee going into countries (China, India) where consumption will dramatically increase, thereby creating more demand for a crop which is already difficult to produce due to its need for a particular type of climate.

As he discussed the somewhat precarious future of coffee, I thought I might ask, very casually, what he thought of Starbuck's, which I still have yet to come up with a code name for.  He was incredibly non-committal:

"They do some things right."

"They have changed some of their sustainability practices, and that is disappointing."


I decided to change the subject as I did not think that leading him down a path to bash Starbuck's would have ended well.  It felt like he was holding back and having yet another conversation on the evils of Starbucks would not do anyone any good.  He did talk at length about his thoughts on the impossibility of Stumptown being able to produce as much as they say they do.  Given the set up they have, he estimated that the company would have to roast around the clock in order to produce what the company has been quoted as producing.  But, he said, he didn't feel like he was competing with Stumptown as much as he was competing with Pete's and Starbuck's.

Then he started talking about his farm.  Mark owns a farm in Africa.  He has made an impact there by piping water into the community the farm resides in.  This saves families in the area from sending a member (young girls mostly) on a walk three hours each way to get a bucket full for their family each day.  He has also created partnerships with other farmers there, helping them to produce more.  In fact, wherever Portland Roasting sources coffee, the company steps in to contribute directly to the community the farm resides in.  Whether it be paying the salary of a computer instructor to teach children computer skills, funding a women's literacy project, or creating World Water Day in order to raise funds to contribute to an organization which installs water pumps throughout sub-Saharan Africa, Portland Roasting is not only working on carbon neutrality, as a company, it is improving communities all over the world.  As Mark told me about all this, he lit up, became animated, in fact, almost became a different person.

Then he told me about The Girl Effect.  This organization addresses poverty in a unique way: It looks at the lives of impoverished girls in developing countries all over the world and outlines that by changing their lives through additional education, the world would improve and therefore, there would be less poverty.  A pretty straight forward and logical solution to poverty, but when put in the context of outlining what impoverished girls in developing countries have to look forward to generally, (marriage at 14, babies at 15), it is really pretty inspiring.  Mark was as animated as I had seen him during lunch, and it effected me deeply.

While he looked quite ordinary upon our meeting, through our conversation, Mark developed a gleam in his eye and an optimism in his character which lifted him.  When I asked him what he thought it meant to be a Portlander, his answer was also pretty straight-forward: business people who "get it".  Or, put another way, business people who understand that they are responsible for the communities they do business in.

Again, straight forward, but given the context of business practices across the globe, pretty inspiring.
Posted by Spike at 6:52 PM