Portland and the Flower Garden

Sometimes, when you are working on a project, events arise which cause you to change course a bit, or do things differently.  One such event has arisen on 25 People.  I have started to receive what, if pushed, I would have to call hate email, in response to my Craigslist ads.  Not a ton, but, enough for me to reconsider how I am meeting and talking to people about the city they love.  Now, I don't want anyone out there to worry, as I have mad kung fu skills and I am very good at sensing and avoiding real danger.  Also, my bike, Bella, is incredibly fast when she needs to be.  To make a long story short, I have decided to try other avenues in order to set up these meetings.

As fate would have it, there are some companies who are not able to sponsor my project, but would like to support it nonetheless, as it is so incredibly amazing (my words, not theirs).   I want to help these companies, which is why I asked them to sponsor in the first place.  In order to kill two birds, I have been offering meetings at Portland favorite places to owners and employees of the companies which cannot afford to sponsor.  One such meeting was with Charles Letherwood of Tom Dwyer Automotive Services.  I asked the company to be a sponsor because I thought it would be ironic in a completely naive way to have a car repair shop sponsor an Epic Bike Journey.  Not surprisingly, it was a no go, (not because they have an issue with bikes), but while I was talking to Charles Letherwood about sponsorship, I suggested he pick his favorite Portland Place so that we could meet there and he could tell me all about it.  I also decided, after he told me that he went by "Charles" instead of "Chuck", that I would refer to him exclusively as "Charles Letherwood" in my blog, as I thought the sound melodious, with just a touch of Victorian sensibility.  Much to my surprise, this guy from the automotive repair garage picked the Crystal Springs Rhododendron Garden as his favorite place.  Suitably Victorian, ironic, and, conveniently, I had never been there before. 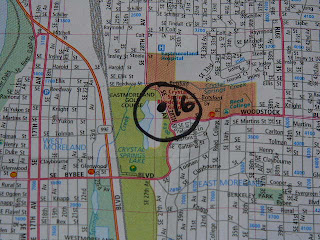 We met at the Rhododendron Garden late in the afternoon on a warm and sunny day.  I find it strange that this phrase, "warm and sunny day", keeps coming up in my blog posts, as I am talking about Portland, Oregon in the beginning of June, but, so be it.  The garden is marked by an old brown wooden sign with faded yellow lettering.  It is in between Reed College and a golf course, in the bend of a busy and unkempt street.  It is pretty easy to miss, and frankly, though I have been aware of its existence, the garden never really appealed enough to me to make a stop for it.  Charles Letherwood had come from work and was wearing his Tom Dwyer shirt, looking every bit the Portland guy.  He sported a full beard, a relaxed smile, and his accent hinted at origins far beyond the borders of Oregon.

After paying the incredibly reasonable three dollar entry fee, we walked around the garden a bit, looking at the various flowers.  Evidently, we had missed the height of the season by a few weeks, but there was still plenty to see.  There are more than 2500 Rhododendron, Azalea, and companion plants on almost ten acres of park, along with some pretty cool paths, a spring-fed lake, a pond with a stepping stone bridge, plenty of ducks, geese, and later in the afternoon, adorably diligent little mosquitoes, which turned out to be much more attracted to Charles Letherwood than they were to me.

Charles Letherwood likes the garden because it is the place he gets to play "Troll" with his daughter.  He also likes it because of how peaceful and well-kept it is.  In fact, the garden has flourished almost exclusively on volunteer support.  After we had walked around the park and had seen some pretty spectacular flowers, we sat down on some rocks by the small pond, fed by a well designed waterfall.  I was preparing myself for a boring talk about cars, right up to the point where he told me that he was the only one in the shop who didn't really know anything about cars, except, that if I was to ever buy one, it should be a Toyota.  I replied that I was planning on never buying a car again, news which did not seem to effect him one way or another. 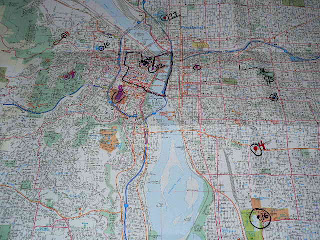 Charles Letherwood started at Tom Dwyer roughly three years ago.  He was hired to drive the van around town in the mornings and do outreach for the garage in the afternoons.  He got to know the customers that way, and he said that for the most part his job was pretty easy, because the garage itself is a pretty remarkable place.  He just has to figure out ways to tell people about it.  I had only had one experience with the garage in the past, and it was when they told me they couldn't work on my VW Jetta biodiesel due to the fact that it had been thrown together with a lick and a promise and it would not have been to my advantage to make it reliable.  While this interaction upset my wasband, it was the first of many events which eventually led me to sell it, for which I am most appreciative.  I decided against telling him about the interaction, but did ask him why he thought the garage was so "remarkable".  He told me that it was because Tom himself was a pretty remarkable guy who had built the company around his remarkable values, and proved that by quoting Tom throughout the conversation.  To his credit, he also quoted MLK and The Buddha, so I felt like he probably understood the meaning of the word, outside of just being thankful to have a job.

As it turns out, Charles Letherwood is a pretty well-rounded and informed guy, even by Portland standards, which, in my opinion, are generally high.  He is one of the people responsible for writing/compiling Your Car Matters, the Tom Dwyer newsletter which contains surprisingly little information or news about cars.  What it does have is recipes, a political cartoon called "What Now!", a section called "Tom's Tidbits", and my favorite, "News to Make you Furious".  June's edition features a bit on Monsanto's Indian Suicide Belt.  I asked Charles Letherwood if he had ever considered putting in something like, "News to Make you Ecstatic", or, "News to Make you Curious", but Charles Letherwood just smiled, somewhat wryly, and said, "no."  In a way, this is good news for me.  Less competition for my highly inspiring and optimistic blog project.

Our conversation rambled in several directions.  After we had finished talking about the magnetic bumper sticker and book library at Tom Dwyer Automotive, we started talking politics, which slowly turned into a conversation about religion, during which I made a statement akin to, "It seems like most of the world's religions have similar values, like compassion, tolerance, love, acceptance....", to which he answered, "well, I have read the Kuran, and the Bible, and the Bhagavad Gita....." and then gave me examples in each which pretty much proved that statement dead wrong.  There is nothing like sitting next to a serene pond, talking about philosophy and religion, and basically getting schooled on these subjects by a guy who works in a car garage.  I commented to him that it was interesting that he worked at said garage and he was so well-rounded, so well-read, and so well-spoken.  Then Charles Letherwood told me something I never would have guessed.  In addition to being all the aforementioned wells, he was also well-raised in Alabama, by people who, among many good qualities, eagerly embraced the Alabama racist stereotypes.

Here sat Charles Letherwood, raised by racists, working for probably the most progressive auto mechanic shop in the nation, speaking knowledgeably about religion and quoting MLK and The Buddha.  I could see why he was such a good outreach coordinator; Charles Letherwood really knew how to reel a person in.  In fact, when I was telling him at the end of our conversation that I was feeling like there was a connection between the garden and the garage that was just beyond my fingertips, Charles Letherwood had the nerve to say almost immediately, in his humble, almost completely washed-out southern accent, that, "both the garden and the auto garage are about the community that surrounds them, the garden is kept and supported by volunteers, and the garage is supported by a community which Tom has created by always doing what is right, whether it benefits him personally or not."  Well played, Charles Letherwood, well played indeed.

As I sat in the aftermath of Charles Letherwood's philosophy bomb, it occurred to me that this is why I love Hippo Hardware.  The store really belongs to its community.  All three of these places hearken back to a time when you were not an anonymous number to the businesses that served you, and the people running the businesses were not anonymous to you.  Back in the day of The Butcher, The Baker, The Cobbler, even The Barber, and long before Home Depot, Super Cuts, and One-Stop Shopping became all the rage, before people started asking you for your zip code at the register, people and businesses made up a community within which individuals could pretty reliably operate because there was personal accountability.

Things come back around.  It is because of multi-national corporate indifference that such huge value is placed on businesses like Tom Dwyer Automotive.  It is because of our ever-growing reliance on technology to communicate with each other that sitting in the same space and really listening to the person talking to you is such a rare gift.  As we hopped over the stones and reached the other edge of the pond, Charles Letherwood turned, crouched and did his Troll impression for me.  His Troll was menacing, twisted, and fittingly, had a strong English accent.  It was a bit of a relief, actually, after being dazzled by Charles Letherwood's philosophical speed earlier, that he had it in in him to be a scary English Troll.  It is the Trolls of the world, after all, that make people like Charles Letherwood that much more remarkable.