Portland and The Green Girl

I look into the eyes of Maria Cahill, founder of Green Girl Land Development, and I see something there that immediately sets me at ease.  I feel as if I know her; her looks, composure, even her glasses, are all very familiar to me.  We introduce ourselves and sit down on the cold concrete blocks in front of Portland State's Engineering Building to wait for her husband, Steve.  Maria opens her Camelback and pulls out a large plastic case labeled "BALLISTIC" which completely envelopes her phone.  She opens it and says cheerfully, "I need this because my nickname is Maria, Destroyer of All Things."  She then points to the "Ballistic" label on her plastic case and says, "sometimes I need to go there."  Maria's east coast accent is not thick, but it is noticeable.  I smile to myself and realize that the reason she feels familiar is that she is probably the same kind of type "A" woman as I am, prone to argument, driven, and, the one thing most Portlanders can't abide, direct in communication style. 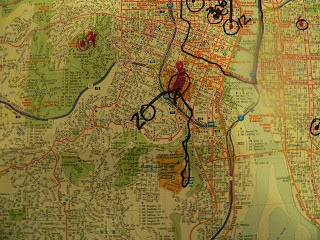 My old red backpack sits beside me, bulky with my bike shoes and  helmet.  I am wearing my running shoes for my Portland Favorite Place meeting, a hike up and over the West Hills and into the charming neighborhood known as Multnomah Village, in SW Portland.  I have been looking forward to this meeting for weeks.  Mostly because it has taken that long for Maria, the stars and I to align our schedules.  The hike is about five miles up and down the trails of Southwest Portland around OHSU, and will take about two and a half hours.  I am only going half way with Maria and Steve, and then turning around and hiking back to my bike in order to go to another appointment.  Life as a social scientist ain't easy.

Soon enough, Steve joins us and we head over to Takahashi for Sushi.  It is not quite five pm, and rush hour is in high gear.  We are navigating a particularly tricky intersection, which we all admit to trying to avoid at all costs when we drive.  It takes a while but we finally make it across.  As we walk through the strip mall parking lot to the sushi place, we notice that the "Closed" sign is there to greet us, so we wait outside on the curb, discussing the convenience of the West Hills as a natural blockade, and the fact that Maria and Steve live in Multnomah Village, somewhat beyond that blockade.

Despite the "go away" language seen everywhere on the hills, highways and restaurant sign, Maria and Steve felt welcomed by the trees and the views of Multnomah Village when they decided to move there seven years ago.  In hopes of making it an even better place, Maria volunteers as the secretary for the Multnomah Neighborhood Association, which is dominated by people over 60.  This situation, she says, very often leads to frustration as this group is mostly interested in keeping things the same.  People her age, (and mine), are too busy raising children to attend, so she deals a lot with people who dislike "her kind": people not born and raised in Oregon who don't understand the evolution of the village and who like bikes and walking.

I have to admit, Multnomah Village is actually quite quaint and not a bad place to visit, especially if you like beer.  It is centrally located to some of the largest tracts of open spaces and parks in the city.  For Maria and Steve, coming from Philadelphia, where degraded open spaces collect trash and are often venues for extensive and highly dangerous criminal activities, the parks here, right in the city, are an easy way to spend more time outdoors.  The open spaces serve Maria in many ways, as non-vehicular transportation corridors, as inspiration, and as central to the work she does.  "Forests and open spaces are where the best urban habitat and storm water management happens.  Views of nature make for healthy communities and have been shown to improve well being,"  she tells me. 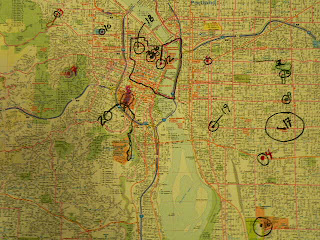 The Sushi place, renowned for being a choo-choo-go-round, opens, and we go in and sit at the counter.  The Sushi master welcomes Maria and Steve with double helpings of ginger and wasabi.  As soon as we settle in and grab some plates, I ask her what exactly a green civil engineer does.  "We go around being really friendly to people!"   She exclaims, smiling widely.  Ah yes, sarcasm.  I am fluent in this language.

"Basically, I help people and companies plan building and land management projects sustainably.  I get hired on as a consultant or resource, and direct decision-makers toward solutions which will save the company money and preserve the land and resources."

As I am downing a fresh piece of Salmon and imagining how great it must be to be able to shape the landscape and future of the City of Portland in this way, she adds,with a note of irritation in her voice,"the problem is that people hire me, and then very often, don't take my advice."

She goes on to tell me about one client in particular who hired her, appeared to be taking her advice, but then never followed through with the changes to the plans she had given them.  After installing the wrong thing, they even got compliments from the public agency, who was equally misinformed, on the quality of their installation.  She was pissed.  I don't blame her.  There is nothing more annoying than being hired to do a job because you have some expertise on the subject, and the science to back it up, and then having the person who hires you decide that they are going to do it the way they had originally thought they would.  Maria and I commiserate a bit more on this shared experience, and then she offers me a wonderful little ball of Mochi goodness covered in sesame seeds for dessert.  This is a new and delicious experience, and one I plan on repeating whenever I go back.  We thank the Sushi Master and push back out into the strip mall parking lot, under the Portland afternoon sun.

Maria and Steve lead me to a path I have never hiked before, and before I know it, we are among the trees and ferns and fauna of one limb of Portland's Marquam Park.  It is still a bit muddy after the rain, but it is not of consequence.  As Maria and I continue our conversation about our seeming inability to communicate effectively with People of the Northwest, the trail starts to get steep; switch backs keep us working hard and I  aggressively inhale the cool, damp forest air, to the point where my voice sounds a bit forced.  I take this as a sign and stop talking.  To punctuate her experiences of poor communication and woe, Maria tells me about a recent decision she came to regarding her mother in-law on a family vacation.

"When we got married, about twenty years ago, I told my mother in-law, you raised the man I love, and now, we are family, and I love you too.  I am Italian, and we are big into family, so it didn't occur to me to approach her any other way.  Well, she didn't really take to that, and for years and years, whenever I saw her, I would try and love her by talking to her and trying to be nice, and it always ended with the both of us being miserable.  The last time we saw her, I decided to almost avoid her altogether, and you know what?  It worked like a charm.  I realized that the best way for me to love that woman is to stop trying to be friends with her.  That is how she wants it, and that is how I actually came to enjoy my last vacation with his family."


We wind our way around OHSU and other roadside attractions on the trail, and after Steve kindly confirms that I will know how to find my way back from where we wind up, Maria tells me about teaching a recent sustainable development class.

"Normally, I am very type A about my classes.  I have notes, Powerpoints, everything is planned in advance.  For this class, I decided to just open it up, and I took the class to a bunch of different sites and had them look for things that were or weren't working the way they thought they should.  It was amazing, because these people were looking at things I never would have.  One of the guys actually lifted a manhole cover.  I never do that because of my bad back.  It was a whole different teaching experience for me, and I got a lot more out of it than I would have doing it the way I usually do.  I'm sure my class attendees did too."


It is amazing what happens when you shift your perspective just a bit, or allow for someone else to show you something you might not have seen.  Maria's stories had struck a chord with me because they were both examples of her being able to let go.  Let go of control, her expectations, of the way she normally communicates.   This is not easy in a culture where control over machines, nature and the universe at large, is a stated goal and ultimately revered.  I have to wonder if it is why Maria got into land development.  Maybe she hoped to convince people that it is better to work with and for nature rather than to attempt to bend it to one's will.

As Maria told me these stories I saw her frustration melt away.  Her anger morphed into an air of victory.  We hiked on and filled our lungs with clean air and our heads with possibilities, and the world's frustrations seemed to distance themselves.  While Maria and I both know the frustration and torment of advice not taken, we also know the satisfaction of letting go and just seeing what happens.  As I hugged Maria good-bye at Terwilliger road and started my descent back into Portland, I had a suspicion that at some point in the very near future, she would probably have a breakthrough with her business.  If she is able to figure out a way to get along with her mother-in-law after twenty years of watching it not work, the people who hire her to help them with land development could not be too far behind.