I am sitting in Squat and Gobble on Haight Street with two creatures I have been seeing all over the streets of San Francisco.  They are tall, beautiful, smart, and young.  Allison and Rebekah, or people like them, are ubiquitous in the downtown area.  Since my arrival, I have been wondering what it takes to be this put together at all times, and what exactly they are so dressed up for. Though they do not come out and say it, they behave as if they are BFFs.  They speak of their shared history with an easy familiarity, and half way through the conversation, they begin finishing each other's sentences.  Squat and Gobble is not their favorite place.  It is, however, much more quiet than the place I had originally met them, The Citrus Club, on Haight.  We are sitting precariously close to a family with children, and Allison has strategically placed herself between her friend Rebekah and the flailing youngsters.  Rebekah likes dogs.

They are trying to give me a feel for what the city is like for its occupants, what they love about the city, and how it fits into their lives in terms of day to day living.  We spoke extensively at The Citrus Club about SF living (don't call it San Fran, only tourists call it that, and Gough is pronounced "Go", not "Goff"), and over and over, what it came to for the two was friends, books and food.

Rebekah begins by talking affectionately about Alamo square and the Painted Ladies found there.  It is easy to get to and offers a great view of the city on a clear day. She also likes going to the Palace of Fine Arts on weekends to watch all the women shivering in their brides maid or quinceanera dresses.  Allison tells me about the deYoung museum.  She loves to go there on her days off and weekends and just walk around.  For both of them, in every place they go, it is about watching the people.

"It is kind of like when I cook, Allison says, nibbling on Rebekah's chocolate cake,  "I really love to cook, but I love to cook more when other people can eat it and enjoy it.  It is the same with the museum.  I enjoy it much more when I am with people or see people who are truly enjoying it.  Watching people see things for the first time and being amazed, that brings me joy.  It is fun to sit back and watch people marvel at things that I can see whenever I want" , she continues, "when you drive across the Golden Gate Bridge or go to the Palace of Fine Arts or the deYoung, you appreciate it more, because you know its a place that some people never get to see."  Rebekah adds, "people come from all over the world to see this, from Paris, from London, from Hong Kong to look at this for just two hours, because that's all they have."


Allison's strawberry crepe arrives, and the two of them tell me about the value being members of the various museums around town brings.  They spend random spare hours walking through halls of fine art, looking at new exhibits at The Exploratorium, The California Academy of Sciences, (the "greenest" museum on the planet), and the MOMA.  They speak at length about the pocket parks in San Francisco, where to get great food for very little money, about the traveling food trucks, (Off the Grid) which appear on different days of the week in different places in the city, and the city's move toward sustainability.  Towards that end, Allison tells me about the Exploratorium's living roof.

"They took the building that was there, which was the aquarium, and rebuilt, basically trying to use as much of the material as possible, and built the rest with sustainable products.  They also used captured rainwater for the irrigation of the plants and flowers on the roof. San Francisco is really making strides to be green.  The music festival alone, (Outside Lands music festival), all the plates, cups, forks, spoons, everything is biodegradable."


I ask them about what they like to do with people from out of town, and Rebekah offers a strategy that takes care of many points of interest with one outing. 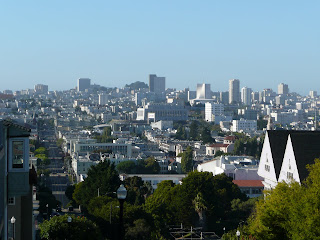 "One of my favorite things to do with tourists is go down to the ferry building and get bread, cowgirl creamery cheese and maybe some coffee, and walk up and take the California street cable car which goes all the way to the top.  We get off at Van Ness and walk two blocks to Lafayette Park and have a picnic.  On a clear day you can see everything from there, Alcatraz, the bridges, and the bay."  Allison adds, "really, San Francisco is just about getting with a lot of good people, sitting down, and eating, and then maybe doing something active after."


The conversation evolves into one about transportation and how the women get around the city.  This is of special interest to me as I am not one who puts much thought into how I will appear when I arrive, only that I will get there on my own propulsion.  It is clear that San Francisco is an active city.  You can't walk two blocks without passing someone jogging, biking or carrying a yoga mat.  Rebekah tells me how the two of them get around in different situations.  Evidently, one needs extra shoes to go almost anywhere in this town.  Rebekah and Allison start speaking in a cadence much like my uncle Ed and aunt Dot used to do when they were quite old, completing each other's thoughts.


Rebekah begins,"we walk to places a lot.  We may walk four blocks, and to us, that is not a walk worth mentioning, but tons of other people see that as a hardship. Allison interjects, "we walk everywhere.  I'm a big fan of extra shoes."  Emphasizing her point, Rebekah adds, "how many pairs of shoes do I have with me right now?  Three!  I don't like to wear uncomfortable shoes if I know I'm going to be doing a lot of walking.  Toms are so light, thin and small they are easy to carry, you don't have to worry about them."


The conversation about shoes leads into the inevitability of the need to appear appropriately dressed for any situation.  Allison explains,"if you are going from work to somewhere else, you still want to look professional."  Rebekah tells me,"I will stop a half block from my destination and take off my Toms and put on my heels again, so I can walk in in my heals." Allison continues,"you don't see people in tennis shoes, you see them in flats.  Something that will still go with the outfit, because you never know where you are going to end up and who you are going to run into.  Because it's such a small city, you end up running into people.  You never know if you will run into someone you work with, or, maybe, see them with a client."  Rebekah adds,"Its one thing if you are clearly on your way to or from the gym, but, in any other situation, you have to prepare for anything.  It's such a small town, you don't know if you are going to run into someone from the industry you want to be in, or the industry that you are in."


Allison specifically defines the practicality of having to look professional almost everywhere you go, and the opportunities you can have if you are so prepared.


"Everything is considered networking here."  Rebekah nods and says, emphatically,"Everything."  Allison continues, "especially in the economy that we're in.  People are either looking for something more stable, or that job that they actually want to do.  You never know.  When my boyfriend lost his job, we were all networking to see what was out there for him.  People are really responsive to this too. People get interviews that way."  Rebekah does a lot of networking, which she says helps those around her quite a bit, "I'm constantly introducing people through networking.  It has never been especially helpful for me, networking-wise, but I have met a lot of people who I have introduced to a lot of other people."


As Allison and Rebekah go to work on Allison's strawberry crepe, my mind drifts to meals I have shared with my own BFF in Portland.  It is very nice, sitting here with these two women who initially seemed so different from me and feeling welcome.  I ask them about where they live and if they like living in the city, and while both of them offer and immediate and emphatic, "yes", Allison talks about the downside of living in such a small city where space is at a premium.

"My boyfriend and I live in a box.  Literally, one room.  The thing about that is that you live in such a small space, it is impossible to have people over.  I know people who don't even use their kitchens simply because they are so small.  They use their stoves for storage."  Rebekah explains how she deals with living in a studio apartment.  "I have a restaurant by my place that I refer to as "my living room" because when people come over, I just bring them there. You can get wine, beer, food.  I don't have my own living room, so we just go there."  For both of the ladies, this is an easy trade off for what you get in return. Rebekah offers,"there is not a lot in San Francisco that is unattainable.  Most of the activities and the places to eat are well within reach.  It's not like after six years of saving you can go to the Opera, and you can still see a great band for an eight dollar cover."


We sit around the table, plates empty, and chat a bit more before leaving.  At the end of the evening, we walk down Haight together, Allison towards her car, Rebekah to the bus stop, and I in the direction of my bike.  Both women offer to hang out with me at some point during the remainder of my stay.  Such a compliment, coming from these very funny, smart women.  I accept, we all hug and then, part ways.  As I walk to my bike I consider the trade-offs involved in living in this particular city.  I myself have a very long bike ride ahead of me to get to my temporary home in the Glen Park neighborhood.  Even if I don't end up lost in the windy roads around Twin Peaks, it will take roughly just short of an hour for me to get there on my inefficient-but-sturdy rental bike.  I think about familiarity and the value of community and how good it feels to have someone around who can finish your sentences for you.  I can't imagine any amount of space or stuff being equal to it.