San Francisco and the Humble Home

A big part of coming to San Francisco has been attempting to secure couches to sleep on while I am here.  Up to about a week before I was to leave, I was at a complete loss as to where I would be staying during the length of the 25 days in San Francisco.  Couchsurfer.org was inundated with requests, and all of the hostels were full.  I was coming to a point where I was resolved to sleep in a hammock if I had to. Then, my bff sent out an email to her San Francisco peeps and I was saved by a very kind family who live around the Twin Peaks area.  I knew the wife and mother, (Marcie), of the family unit through a former employer, but I had known her so long ago, and for such a short time in such a limited way, I had all but forgotten about her until she offered to help me out.  Initially she had volunteered to meet with me to show me her San Francisco favorite place, but when I asked her to host me for a few days, she didn't hesitate to help. Staying with her family has been such a wonderful experience.  They are the definition of hospitable, and it has been a joy to be around her children, even when they are shooting each other with silly string and making food for me which can best be described as "experimental".

When Marcie took me to her favorite San Francisco place, it ended up being outside the city in Saratoga, the little town It's a Wonderful Life was set in.  The cheerfully sunny little town is a contradiction to the serious grey fog and hurried atmosphere of the streets of San Francisco.  The specific area is in the hills where she and her husband were married, where her kids go to day camp, and Hakone, the Japanese Garden she took me to, is the place where the two went before they were married, before their kids came, and then, after they had children.  It is a large garden, 18 acres, and is the oldest of its kind in the Western Hemisphere.

Marcie gave me some background on the town and its weather cycles:
"Saratoga and Cupertino have historically had a large Japanese population.  It is a hot mountain town, but it is strange because there is a rain forest not too far from here, and then Santa Cruz to the south, and the beach on the other side, so it gets wickedly hot over here.  Usually, by the end of a day in August, I feel fatigued and sweaty, like I have been working in the fields. I am scorched when I walk out of the door of my office."


As we walk through the small town, I comment that it really is a perfect day, sunny, low 80's with a nice fragrant breeze blowing through.  Marcie replies that this is a bit of a respite from every other year in Saratoga, which is good news to me as I get heat stroke and sun stroke quite easily. Marcie had also lived in Portland for a spell, and drew a similarity between the two places in its siren call to visitors.

"It's like Portland in that if you visit at the right time of the year, you might think it is like this all the time, which it is, really, it just gets so crazy hot in the summer."


Of course, in Portland, it is quite the opposite in that for about three months of the year it is like paradise and for the other nine months, it is grey, cold and quite damp if not outright soaking wet.  On the plus side, it is a rare experience for me to have to worry about sun stroke or heat stroke there. 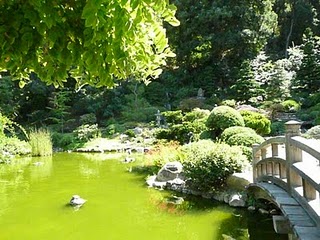 As we enter the Japanese Garden, its size really strikes me.  While not as perfectly manicured and organized as other Japanese Gardens I have seen, it has a vastness and a rustic quality to it which is stunning.  Marcie tells me how the area and the Japanese Garden in particular has played a significant role in her family's history.

"I have memories of coming here with Michael,(her husband), before we had kids, and coming here with Emily to do the Mom-daughter yoga with her teacher and all our friends.  I have pictures of Emily sitting in a lotus position next to this pond, pictures of her feeding the turtles.  It has been a really nice place for our family.  This Japanese Garden is cool because it is not in a Japanese-like climate as it is very warm and dry. The Garden was built a very long time ago, during old-school times, and this is why it has that quality to it, it is the oldest in the country."


As we walk through the gates and onto the gravel path, Marci finds a dying salamander with a blue tail lying on its back.  We go to the Koi pond so that she can put the salamander in it and hopefully resuscitate it.  As we stand and watch, it just floats there, motionless.  It seems that it is dead, and I start wondering if a feeding frenzy won't soon occur between the fish in the pond over the small creature.  To my relief, the Koi seem more preoccupied with the food the tourists are throwing into the pond.  Salamanders are probably too bony for Koi anyway. As we walk through the rest of the Garden, we are, for the most part, quiet.  It is an irony that I have come to stay with this welcoming family.  Their relationships with each other are just as foreign to me as are the streets of San Francisco.  Living with them for this short period of time has been like a trip to another dimension where parents make time for their children and are thoughtful about how they are raising them.  My home growing up was very a often a place where I was uncomfortable, a place I wanted to be away from as much as possible.  Walking with Marcie through the Japanese Garden, hearing her talk about her family and the thought and love she puts into its cohesion is inspiring.  I am happy to be here, visiting this new place and meeting these new people.  Just as Saratoga contradicts San Francisco, Marcie's family contradicts my experience and memory of my own.  I am comforted by the knowledge of this existence, though I must say, my upbringing has conditioned me for a world that is a bit more serious and grey.  I am lucky to have come to the point where I can appreciate both.