For my first meeting with a Portland person, I made an arrangement with Robert, an older gentleman, (older than me, maybe not you), who initially needed a bit of cajoling towards picking a Portland spot.  There are, after all, many great ones.  After a few email exchanges he picked the Laurelhurst area, and planned that we go to Laurelhurst Park, Pine State Biscuits on Belmont, and then, on to Alma Chocolates on NE 28th.  Robert had described himself as having "clown hair", though it was white, 6 feet tall and glasses.  For some reason, I always picture clown hair as bright orangey-red, but I guess it really depends on what type of circus we are talking about. When I asked him in my email if he would be wearing something distinctive, his reply came, "distinctive in Portland?  You mean, like a suit?"  Yes, indeed, I knew Robert and I would get along just fine. 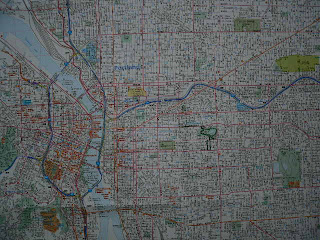 I was sitting on a concrete wall, waiting for Robert in the drizzly, misty, spring-time Portland weather right outside of Laurelhurst park, when I hear, "blue jacket, you must be Amy!"  Which was an incredible coincidence, because my name has always been Sara, but, for some reason, at least once every few years, someone either mistakes me for someone named Amy, or, calls me Amy because I remind them of an Amy.  In fact, my father wanted to name me Amy, but, thank the heavens, this did not come to pass.  I am really not a big fan of the name Amy.  Don't get me wrong, I have friends named Amy, lovely women, all, but really, if you knew me, you would know- not at all an Amy.  Most Amies, (plural proper names, they're tough), are much nicer than I am.

So, I corrected him, to which he replied that he had just been speaking with someone named Amy, thus the mix-up.  The thing about Robert was that he reminded me of someone, and though I could not put my finger on who, I knew it was someone who I did not like very much.  Go figure.

We started walking around the park, and he pointed out the lovely, and in some cases, incredibly large trees, some of which were flowering and casting a lovely aroma, the great dogs, the people, the wonderful-ness of one of the oldest parks in Portland.  He talked about the architecture in Portland, the beauty of the architecture surrounding the park, and the nature of the people who you could find in a park such as this.  It wasn't long, however, until we both started to partake in what I believe is one of the favorite past times of the many liberals of Portland.  Complaining.  We, of the bicycle-riding, organic-food-eating, extremely-left-leaning variety, we, of the micro-brew-drinking, off-the-beaten-path-walking, rainbow-flag-waving Portland liberals.  We, I can tell you, are some of the worst hypocrites you will ever come across.  I know.  I have met many, and none have been as ardently judgmental and righteously indignant of others who also consider themselves "liberal". 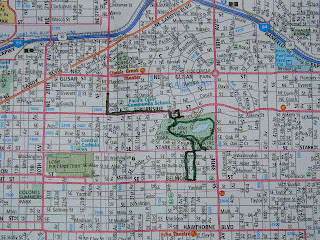 He launched into the reality of Portland growth, how cool certain areas used to be, and how corporations have come in and transformed these areas into decidedly un-cool.  His first example: Northwest 23rd.  It used to be full of little shops, independent coffee houses, even a couple of second-hand stores.  Then, the corporations moved in, (Starbucks, Williams-Sonoma, Pottery Barn, Kitchen Kaboodle), and turned what used to be a charming little area into a soulless, white-washed overly gentrified wasteland.  Only a few of the cool little shops remained.  This led to our conversation about how quickly great little places come and go in Portland, and how you really have to get in to a place early and often before they are forced to close their doors forever.  One such place, Margaret & Oliver's, a charming little vintage clothing store on Hawthorne, still carries quite a sting for me.  Then, onto SUVs and the waste of them, the people who consider themselves "outdoorsy" who must purchase the latest, brightest outdoor gear every season, the reality of the corporate-controlled political system, I mean, really, it went on and on.  Then, we headed toward Pine State Biscuits.

Pine State Biscuits is this very little place on Belmont, (there is one on Alberta, too), which I had never been to before.  Within a block of this place, I could smell the aroma of eggs and cheese and biscuits and gravy and pork and other heavenly things.  The more deeply I inhaled, the more difficult it was to believe that I had never been.  We stood for a few minutes outside of the door in order to wait for some people to leave, and when they did, we walked in.  It was set up as more of a take-out place, the kitchen being larger in size than the dining area, which was quite small and densely packed.  Robert pointed out the menu and told me he preferred the right side of it.  All of the biscuit-y meals were on the left side, but I figured, do as the tour-guides do, so I ordered from the left.  Hash browns with all kinds of stuff in it, including pork products, which I love above all else, and greens.  The incredibly friendly young man behind the register let me know I had ordered well; it was what he ate almost every day.  Robert ordered fried green tomatoes and greens, and we took our meal to Laurelhurst Park to find a bench and eat.

It was still drizzly when we arrived, but, no matter, we are Portlanders after all; we sat down on the damp picnic bench, took out our biodegradable-compostable-earth-friendly take-out boxes which held our perfectly cooked local foods in them, and began eating, in the rain.  Ah, Portland, how I love thee.  We ate in relative peace, mostly because I have the tendency to inhale my food, whether eating in the rain or not.  Robert was not an inhaler.  If it is possible, the food actually tasted better than it smelled.  One of the things that I had picked up on when I was talking to Robert is that he needed someone to talk to.  I surmised this in the way that he kept interrupting me many of the times that I had started speaking.  Most of the time he apologized.  I have to admit, this used to bother me, but I did not really have an issue with it with Robert.  As we sat at the table, he told me about his history, where he had worked, where he had lived on the west coast, and finally, where he is now, which is living with a woman who is in her 90s and taking care of her 24-7.  He rarely gets days off, and when he does, he inevitable feels like he wastes them.  I started to feel a bit guilty about my time with him, and hoped that it was worthy of a piece of his time away.  Robert, I believe, really needed someone to listen.  If I had judged him for it, it would have made me more of a hypocrite than I could stand to be.

When you are talking to someone and you come to understand something about them on a basic level which reminds you of your own frailty it is quite humbling.  It is not that Robert comes off as frail, it is that, like many of us, he wants connection with people, and the life he lives does not allow for much of that.  He talked about how great Portland was, but as he said, how great is it when you don't have someone to share it with?  It is scary to reach out to someone; we are admitting to loneliness and vulnerability and the necessity for another in our lives.  Admitting it to ourselves is one thing, admitting it to the world is quite different.  We got up to start heading off to Alma Chocolate, and as we passed a garbage can, he threw our bag of compostables in, saying, "I just hope that it goes into the right type of landfill", without a hint of irony.  I have to admit, I had no idea what he was talking about, but just how many layers of information do you need when throwing away your trash?

We walked in the drizzle toward Alma, out of the park and through Northeast Portland.  The neighborhood that Alma Chocolate is set in is a recent up-and-comer, complete with a brew-and-view, independent eateries, and of course, a Whole Foods and a Starbucks.   As we walked by the Starbucks on the way there, we railed on the evil that is the Starbucks Empire, and lamented the fact that so many were transfixed by its marketing spin.

As we walked into Alma, the aroma of rich, dark chocolate in our nostrils greeted us, as did the incredibly friendly sales girl behind the counter.  It is a great day in Portland when you go to two different eateries and get not just good, but great service in both.  It is a rarity and an occasion to celebrate in this town.  We tried the ginger toffee, which was wonderful, and then I picked out several truffles, a couple for me, and a couple for my bff, who is also a choco-file.  I actually don't know if I like that term, and, in fact, the terms choco-holic, choco-file, and choco-leptic all denote somewhat negative, out-of-control tendencies, which I do not find appropriate, but until I come up with something better, this is what I will have to settle for.  Such is life.  Robert picked out a bag of the ginger toffee, saying, "Patricia loves this stuff".  I inquired as to who Patricia was, and he replied that she was the woman he cares for.  His response humbled me.  I believe deeply that everyone whom you come into contact with is either a mirror or a teacher, and in this particular interaction, I was very much the student.

We walked back to the park, complaining more about politics, our disappointment in the current administration, and the horrible trend Reagan started with his anti-government campaign.  We arrived back at the park a bit moist, but invigorated, and parted ways with a hand shake and a smile.  It was then I remembered who Robert had reminded me of, and decided that I would replace the memory with the one I had just created with Robert, thinking to myself that this 25 people thing was going to be a remarkable experience.