After seven trips through the mysterious and magical shops, streets and parks of Portland with seven very different and interesting gentlemen, I finally secured a meeting with a woman named Anna.  The fact that I secured a meeting with a woman was, in itself, a reason to celebrate.  The fact that I was going to the Portland Farmer's Market on a perfectly sunny day in Portland?  Well, let's just say that some of us are far luckier than others. 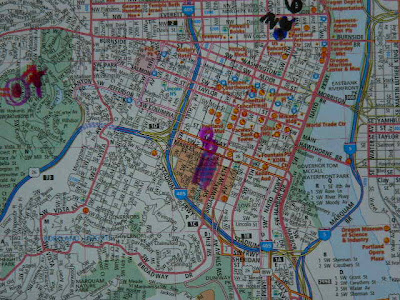 I was to meet Anna at about eleven, when the market would be in full swing.  Portland people of all persuasions were milling about, tasting the incredible samples, enjoying the richly varied one-and two-piece musical acts, and basking in the glory of the Northwest sunshine.  The flowers at the market were vibrant, and it seemed as though every other person who passed was carrying a bouquet or bushel of some type of arrangement around, the air behind them fragrant with the memory of their presence.  I had been given a ride to the market by a good friend of mine, and as I texted Anna to let her know I had arrived, my friend sat down in the middle of the sidewalk, eyes closed, face up, in order to enjoy the sunshine.  People just walked around him taking very little notice.  That is the great thing about Portland; you can rationalize any type of behavior if it is based upon taking advantage of the seldom-seen ball of fire in the sky, especially in early spring when we are all attempting to scrape off the mold and mildew we have accumulated after months and months of the damp, grey Portland weather.

Anna had lived in Portland for several years, but for reasons that are eluding me presently, moved to Seattle.  She visits Portland frequently, one reason being the PSU Farmer's Market.  She told me that the one in Seattle is nowhere near as good because it is just produce, not the wide variety of prepared foods, like pate, pickles, and pork sausage, that you can get at the Portland Farmer's Market.  As we walked around, Anna told me that she loves the Farmer's Market because it is a family outing type thing which subjects children to real food and also to a notion as to where it comes from.  I had to agree.  It is depressing to think about all the crap that is in most packaged, corporate non-foods in supermarkets. 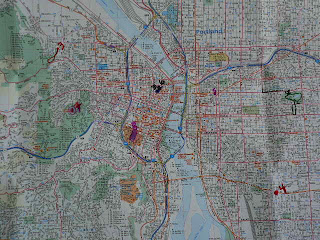 The other striking thing about the Farmer's Market experience is that you get to talk to people who grow/create the food, so you are talking to experts who are incredibly passionate about what you are buying to put into your body.  Imagine the difference this aspect of your food makes; when choosing between growers and makers who care greatly, and those who really don't, it is difficult to understand why you wouldn't choose local every time.  Instead of buying a box of fruity pufferoo cereal off the grocery store shelf, which has more chemicals in it than actual food, you can buy farm fresh eggs from the people who raise the chickens, or granola from people who source the ingredients locally.  As we walked around tasting all of the amazing food, (pickles, sausage, carrots, sauerkraut,  radishes, pate, cheese, pastries) it was wonderful to hear the stories behind it all.  Many of these operations are family owned, and the pride on the faces of the family members as they told their stories was lovely.  As Anna and I are both glu-tards, (individuals who must avoid wheat or gluten at all costs), we stopped at the Petunia's Bakery stall to purchase dessert for the brunch we were planning on eating later.  Each time we settled on something to buy, the woman serving us practically did back flips in excitement at the choices we made.  She was so proud of what she had baked, and so proud to be a part of this bakery, it was difficult to walk away and end the transaction.

Of course, as with any Portland outing, I ran into people I had known from the various lives I have lived in this city; a young couple from my wonderful yoga studio were there buying plants, and a young woman I had known when I worked at a "local" chocolate shop about a million years ago was taking pictures of the market with her friends.  As I greeted her, I recognized that she was much healthier and happier than she had been when I had known her, and I could not help but be delighted for her.  As Anna and I walked through the crowd, we passed fathers with children on their shoulders, bright pink and blue teenagers holding hands, old couples carrying re-usable plastic bags filled with goodies, and people like us, just walking around, enjoying the sights, sounds and smells of a healthy community taking part in a colorfully thriving Saturday morning ritual.  The flowers, vegetables, fruits, and baked goods all sang to us in the sunshine, and the market buzzed with the energy of real life.
Posted by Spike at 2:24 PM