Portland and the Science Pub

As a person who has lived in Portland for the better part of twenty years, I find it incredibly exciting when a person takes me to a place or an event I have never heard of before.  Carl, a man who had grown up in Camas, Washington, is another one of those Portland guys who does not need to work for a living, and proposed just such a thing when he emailed me about Science Pub. Science Pub is an event which OMSI puts on several times a month at either McMenamins Mission Theater, or McMenamins Bagdad Theater.  The partnership between OMSI and McMenamins serves to bring science and beer together as nature intended, and just goes to show you, great things can happen in a community when businesses partner up. 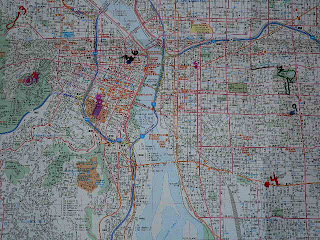 I arrived early and waited for Carl while drinking a cup of green tea.  Carl arrived with a big smile on his face, and immediately started talking.  Carl is remarkably affable.  He was incredibly animated and smiley the whole time he talked, and told me about different things he had done, different groups he had joined in Portland, different places he had traveled in the U.S. and the world, and some of the people he had met and known.  For instance, he met the Groupawn Guy when he came through Portland, he quit his job in his late twenties to go to New Zealand for several weeks, and he even knows the person who is the head of the Portland Timbers Army!!  These three things alone would be enough for any mortal to be proud of, but this is just the tip of Carl's ginormous iceberg.  This guy is a mover and a shaker.  There were times during our conversation where I actually felt a bit of pressure to perform due to all of the things he had done.  Really, this adventure I am taking with the city tour thing, it pales in comparison to what Carl has seen and done in his life; and he is not even that old.  Nor does he blog about any of it, he is just Carl, doing his thing, meeting cool people, going cool places, learning about science. 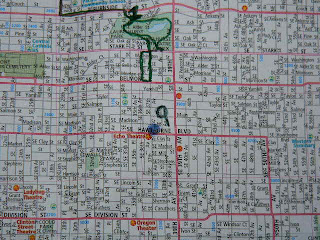 We both ordered a little something off the menu.  He ordered the black bean chili, which was luke-warm when I tasted it, and I ordered a bacon sandwich and an order of Gnocchi, neither of which was memorable in any way shape or form except for the fact that the Gnocchi was more like potato balls with cheese and spinach.  Chalk it up to my BFF and her rules to live by once again.

As we ate, Carl talked and talked; the guy knows a lot of people and has seen a lot of things.  Frankly, I was a bit worn out by the time we headed over to the Science Pub at the Bagdad.  The problem was that all of Carl's conversation was interesting.  There was no point at which I felt like I could space out and relax for a few seconds while he blathered on, because he was incredibly articulate and animated at the same time, and I felt the need to match his energy with at the very least some well-honed listening skills.

After we finished our not quite mediocre snacks, we wandered over to the Science Pub, where the topic was to be Terroir: Geology, Soils, Climate and Wine in the Willamette Valley.  This discussion was going to be all about the science of good wine and the original people who started the whole wine movement in the Willamette Valley.  The talk was given by PSU professor Scott Burns, PhD, who had taught science all over the world by talking about wine.  This is the kind of thing you see and think, "man, if I had a professor who taught me science by talking about wine, I might not have had to take two make-up courses both times I failed Elementary Chemistry!"  Or, maybe that's just me.  Anyway, he was an incredibly dynamic lecturer, and the crowd was definitely with him.  Especially when he told this joke:

Professor Wine Guy: "They have come up with a new Pinot which helps to keep older people from having to go to the bathroom all through the night.  You know what it will be called?"

Audience: Cheers, and laughs, "What?"

Laughs erupt on all sides, in addition to grunts of disappointment.

This is the kind of environment where real learning occurs.  In a brew pub.  In fact, I think that in order to solve the education crisis in our country, moving the colleges and universities to brew pubs would be a great place to start.  I am sure with all of the good people our government has on this issue, they will come to this resolution in no time.

The Willamette Valley Wine Story is actually an intriguing one.  Wine in the Willamette Valley was basically started, as Wine Professor guy said, by "Two Davids and Two Dicks".  I swear to goodness.  That is actually what he said.  These guys understood the importance of Terroir and its effect on wine, (80% Terroir and 20% wine maker) and capitalized on it, creating the beginnings of what has blossomed into an amazing wine culture here.  Now, you can't swing a dead cat in this town without hitting at least three wineries.

Talk about killing two birds with one stone; not only had I met a man who is basically the walking definition of a person taking an active role in his own life, I had also been to a science lecture where I learned about all of the minerals needed in soil to fertilize good grapes for great wine.  At the end of the talk, Carl and I walked back to my bike, where we shook hands and he offered to help me by introducing me to people who might want to show me their Portland Favorite Place.  It figured, not only was Carl interesting, smart, and incredibly affable, he was also very helpful as well.  It made me wonder if he was good at other things, like ice sculpting, tuba playing, or authentic Chinese food cooking.  After everything else he told me that night, I would not have put it past him.