Denver and The Gnome Hunter

I met Brent through a gentleman I met during my last project, 20 Dates in 20 Weekends. While I am not at liberty to discuss which gentleman it was, let's just say he is probably the last person anyone would expect to still be in contact with me, yet, here we are. And don't guess. Because I am not going to tell.

Brent wanted me to meet him at The Denver Museum of Nature and Science. I arrived a bit early, as I always try to do, and had some time to look around. As I walked around the front of the building, I noticed concrete paw prints leading up to an installation of cast bronze wolves, running in a pack. Very majestic, and quite well done. I was taken a back however by a sign warning me about hot wolf sculptures.

As an artist, you are always thinking about intention. I wondered if this was a comment on the wolves being on the endangered species list, if Sarah Palin had visited recently and mistakenly tried to shoot one or if some poor child had, on a hot summers day, tried to ride one and ended up with third degree burns. We will never know. I kinda hope it had something to do with Sarah Palin, though.

Brent showed up right on time, and we started talking about the museum being his favorite place, and his reasons were so out of the blue that I had to stop walking to pick my jaw up off of the paw print-decorated sidewalk.

"The museum is one of my favorite places because one of the artists, named Kent Pendleton, back in the 70's I think, hid gnomes on all of his backgrounds. They are always well-camouflaged. You can go on a little treasure hunt for all the little gnomes on the art work. I remember ever since I was a little kid always looking for the gnomes. I've never found all of them, so we're gonna hunt today and try to find all of them."


It is hard to describe my feelings of giddy anticipation, awe and utter disbelief that are flowing through my nervous system as we enter the museum. Never in a million years would I have expected to be going GNOME HUNTING. Never in a million years did I expect the museum to have a sheet entitled "Museum Seek and Find" to use with the museum map in order to find the hidden gnomes. As the middle-aged, heavy set woman directs us to the gnome hunting sheets, my pulse quickens. This would be one for the record books. My mind races about exactly how I am going to word my Facebook status update regarding gnome hunting, and Brent goes on about the artist who ingeniously hid these gnomes on the murals behind some of the dioramas in the museum.


"He is the first reason I ever became interested in Art, seeing his backgrounds and looking for his little gnomes. I come at least once a year. I brought my cousins here when they were little, then I came with my sister's kids. I have never actually come just to find the gnomes, so I thought it would be nice today. Another reason it is one of my favorite places is that the view of downtown from here is incredible."

Brent leads me to a three-story wall of windows and shows me the beautiful view of Denver. It is a perfect day to see the city and the mountains behind it. He tells me that he grew up in a very small town outside of the city, and that he felt a bit scared of Denver growing up. 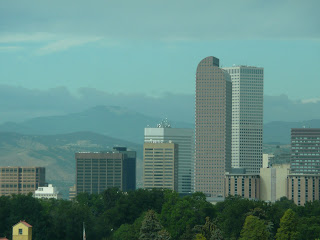 "I lived in a small town growing up, so coming here was just a bit scary. Growing up in the mountains, the city was this amazing place, like, "oh...let's go to Denver!" This museum holds the strongest emotional memory from being a little kid. That is why I like looking at Denver from here. It looks so beautiful."

Brent and I begin the hunt. We find them riding on dinosaurs, peaking out from behind trees, and lazing about on the grass under fallen tree limbs.  They are as whimsical, colorful and maniacal as I was hoping.
We even found a three-dimensional gnome in a diorama under a small flowering bush, waving to the viewer! Oh, how I love whimsy!

As Brent and I walk around the building, he tells me that the place hasn't changed at all, and that it still brings back great memories for him.

"So much changes; your family, your friends, they all change. I probably have four or five good friends that I still talk to from when I was a little kid. My family has little cousins, nieces....we always come to the Denver Museum of Nature and Science. It is a constant, something that is always the same. Everything else is changing. Not in a bad way, it's just different. No matter what you do, things will be different. Coming here is a comfort. Looking for the gnomes...walking around...it gives me a sense of wonder and a sense of being young again.  I love Denver. It is definitely one of my favorite cities that I have ever been to. I have a family factor, but I can't imagine myself living too many other places."

Gnomes abound. And, there was one more character there, who you might just recognize......


As for me, I am becoming more and more impressed with the caliber of person in Denver. Juggling Metallaphone players? French Architects? GNOME HUNTERS?!?!?!  Come on, Denver, is this a set up? It is difficult to believe that these people exist, much less exist in the same town, breathing the same incredibly thin air and viewing the same incredibly stunning sky, yet, here they are. In every city I have been to, I have tried to figure out one element of the city which initially puzzled me. In Portland, it was the large number of Minnesotans that filled the city streets. In San Francisco, it was the anger factor. I was going to focus on the large number of dread-locked business people in Denver, then I switched to the overwhelming number of people who smoke. I believe however that this element is creeping up to challenge those two mysterious aspects of Denver. I think a couple more meetings should help me figure it out, but I have to ask, how is it that I have met so many genuinely interesting and quirky people here in such a short time? Is it the thin air? The wide-spread availability of marijuana? Only time will tell, and I will keep you posted as I dig deeper. Like hunting for Gnomes in the tall grass, I will discover the mysteries of this new and incredible city.